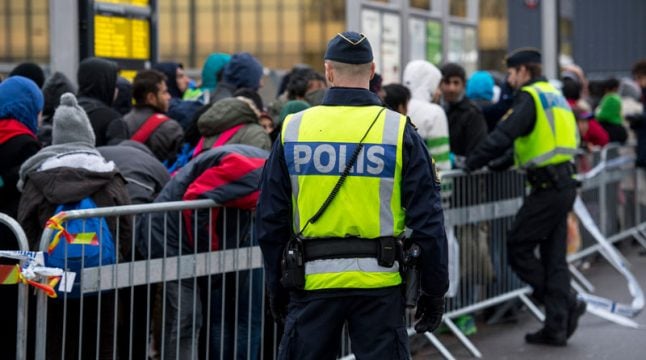 Malmö's Hyllie Station in November 2015. Photo: Johan Nilsson/TT
There is little disagreement on these basic facts. Determining the reason behind these numbers is another matter, however.
Some say it is due to the way in which sexual crimes are reported in Sweden, where all reported events are recorded as crimes and several offences of the same type are recorded separately. In other words, if someone reports being raped by the same perpetrator five times, in Sweden that would be recorded as five potential crimes rather than one.
Others use the spike in rape statistics after 2015 to argue that the increases are due to the large influx of refugees into Sweden. This is an argument that can be found all over certain sectors of online media, where Sweden is positioned as the 'rape capital' of the world and the finger is pointed, either implicitly or explicitly, squarely at the new arrivals from predominantly Muslim cultures.
READ ALSO: Why Sweden is NOT the 'rape capital of the world'
In an attempt to determine what truly lies behind the rape and sexual assault statistics, the Swedish government last year ordered the country's National Council on Crime Prevention (Brå) to look into why the number of reported rapes in the country has increased. Brå was tasked with finding out whether the increase related to specific types of sexual offences, certain situations, or certain groups of perpetrators.
The results of that study were released on Wednesday but they may do little to quell the debate. Brå analyzed statistics from official police reports and its own National Safety Survey (NTU) results between 2005 and 2017, focusing on both rapes and 'sexual molestation' (sexuellt ofredande), a rather broad category that can include anything from inappropriate touching to sending sexually explicit messages.
Both crimes increased dramatically over that time span, with sexual molestation incidents involving victims aged 15 or older more than doubling from 3,400 to 7,400 and rapes nearly doubling from 3,000 to 5,300. A previous report from Brå showed that rapes overall increased by ten percent in 2017 alone.
While the percentage of those reporting violent rapes showed more or less no change, the number of people who reported in the NTU that they had been subjected to other types of sexual assaults more than doubled, from less than one percent of respondents to just under 2.5 percent.
READ ALSO: Demonstrators call on Swedish government to do more to combat rape
Brå concludes that the initial spike in figures seen after 2005 “is largely explained by the legal definition of rape expanding” in that same year.
The second major increase in rape and other sexual crime statistics occurs after 2015, which fuels the argument that it is connected to the increase of asylum seekers in Sweden. But Brå concludes that this is not the case.
The board openly acknowledges that because NTU results do not include any information on ethnicity, it can only offer “tentative analyzes that cannot give easy answers” but it says the numbers don't add up.
The roughly 163,000 people who came to Sweden in 2015 corresponds to 1.6 percent of the national population. Brå writes that “it is not unreasonable to think that the over-risk of crime would be higher for the asylum seekers who came in 2015, because many of them were men, and many were unaccompanied boys”.
The council writes that even if it assumes that these male asylum seekers are five times more likely to commit crimes than those already in the country, their arrival could only account for an eight percent increase in sex crimes.
To place the blame for the entirety of the increases seen in the rape statistics between 2015 and 2016, one would have to assume that asylum seekers are 83 times more likely to commit crimes than others.
“Such a high over-risk does not seem likely,” the report concludes.
READ ALSO: Malmö sees lowest crime stats in 17 years
The report also found that the rise in reported rapes between 2011 and 2017 was linked to incidents that did not involve the use of violence, committed by perpetrators known to the victim – which also make up the majority of sexual crimes. There was no rise in outdoor attacks by strangers in the same time period.
While this reveals very little about the identity or ethnicity of the attackers, it contradicts the theory floated by hard-right media that there are immigrant men wantonly attacking Swedish women.
The report could also not find a link between those municipalities in Sweden that took in the highest number of asylum seekers and those where the highest number of sexual offences was reported.
Attempts to interview a Brå spokesperson were unsuccessful on Wednesday. The full study can be read (in Swedish) via this link.
OPINION: Why Nigel Farage and his friends are willing Sweden to fail
For Jerzy Sarnecki, a criminology professor at Stockholm University who audited the report, the Brå study was enough to put to rest the idea that the increase in rape cases is directly tied to the influx of refugees.
“We are not facing an occupation by Muslim men who rape our women,” Sarnecki told Dagens Nyheter. “The report shows that the immigration influx has not affected the number of sexual offences.”
Sarnecki instead concludes that changing attitudes toward what constitutes sexual assault are a driving factor behind the increase in reported incidents.
“It's clear that there is less tolerance for certain types of sexual offenses that may have not previously been reported,” he said.
Given the controversy that surrounds Sweden's rape statistics both within the country and without, it perhaps not surprising that Brå cautions against making sweeping conclusions from its report.
“It is not possible to give a definitive answer to how the developments within these two sources [NTU and police statistics, ed.] should be interpreted,” the report reads.
The Brå report came just one day after Sweden's Public Health Agency released the results of a nationwide survey that revealed widespread sexual harassment and assault. 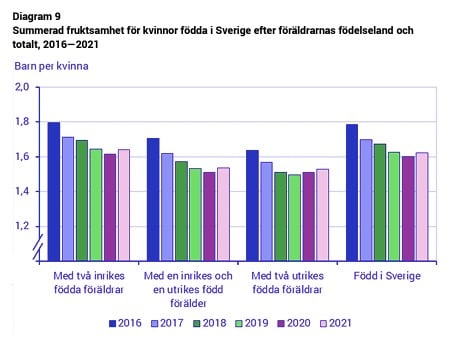