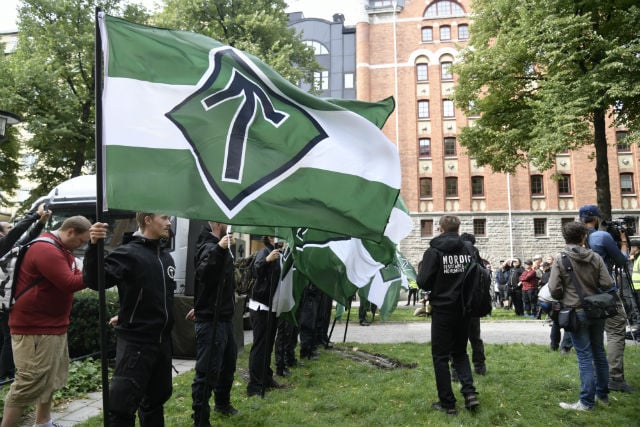 The Tyr rune displayed on a flag of the Nordic Resistance Movement during a march in Stockholm last year. Photo: Pontus Lundahl/TT
The inquiry, led by Charlotte Brokelind, President of the Göta Court of Appeal, found in its conclusions that existing ethnic hate laws were sufficient, and did not need to be supplemented by additional bans on specific symbols.
“Based on our examination of practice, it is our assessment that the current criminal law regulations on racist and similar symbols are appropriately designed,” the report found.
“It follows from this that the provisions on agitation against a population group should not be amended and that a special prohibition against the use of certain symbols should not be introduced.”
READ ALSO:
Sweden’s government decided to launch the inquiry on July 5 last year, after activists from the Nordic Resistance Movement NMR) disrupted a series of speeches at the Almedalen political festival on the island of Gotland. It then appointed Brokelind on September 1.
In its report, it said that Swedish courts had over the last 30 years examined 30 different symbols, with those linked to National Socialism and the Klu Klux Klan the most frequent judged to constitute “agitation against a population group”.
The NMR group uses the Tyr rune, which takes the form of an upwards pointing arrow and which was worn in Nazi Germany by top officials who had attended the Reichführerschule, an institute which instructed officials on race theory and other aspects of Nazi doctrine.
The rune represents the god Tyr, the ancient Nordic god who gave his name to Tuesday. Samfundet Forn Sed Sverige, which represents believers in and enthusiasts for ancient Nordic religions, last year protested the proposal, saying it would ban an ancient part of Nordic culture.
A high court in Norrland last year ruled that wearing or displaying the rune alone did not contravene ethnic hate laws, as unlike the Swastika, its link to Nazi Germany was “not generally known”.
In 1996, the Swedish supreme court ruled the display of a swastika could be considered an incitement to ethnic violence.
Johansson declined to comment on the inquiry’s conclusions.
“The inquiry recommends that there be no change to the law,” his press secretary Adriana Haxhimustafa told the TT newswire. “It is too early to talk about how the government plans to take this further.”
Over the last 20 years, the inquiry found, the main barrier to convicting people over hate laws has been a lack of evidence rather than the lack of detailed proscriptions on specific symbols.