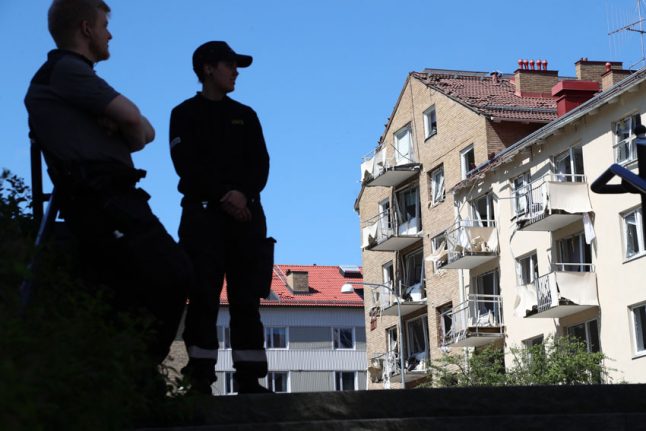 Photo: Jeppe Gustafsson / TT
“We have checked on who lives there and some residents are more interesting to us than others. There are some people [lving there] who have previously appeared in our registers,” police press spokesman Björn Öberg told news agency TT.
Öberg declined to go into details about which residents were of potential interest but police investigator Magnus Skoglund has told Expressen that there were “several” residents of the building that took the brunt of Friday’s explosion that are of particular interest to police.
The Friday morning explosion blew out several apartment windows in the centre of the city. Police said on Friday that the blast was caused by “an explosive device deliberately placed outside” in the area of Hamngatan/Ågatan.
There have been reports that the explosion was connected to disputes between motorcycle gangs but these have not been confirmed by police.
Around 20 people suffered minor injuries, with Öberg saying on Saturday it was “absolutely incredible that nobody was seriously injured”.
Radio station P4 Östergötland reported late on Saturday evening that two victims of the blast that had been transported to the hospital have now been treated and released.