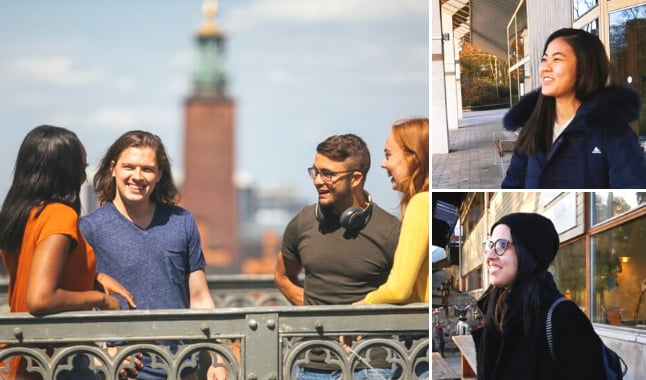 At the beginning of every semester, staff from Stockholm University’s International Office drive to Stockholm Arlanda Airport to welcome hundreds of new international students. It’s a time of great excitement and anticipation, and for many, expectations are running sky-high.

The question is: Are these expectations met once term is underway? The Local visited Stockholm University’s campus to find out.

Polish student Monika, who joined Stockholm University only a few months ago to pursue a one-year master’s programme in European Economic Law (EEL), came to Sweden hoping to meet new and exciting people from all over the world. With its large and diverse student population – nearly 3,000 of whom are international – Stockholm University has certainly ticked this box.

“One of the things I enjoyed most when I came to study in Sweden was that there were lots of international students and locals around, compared to in Poland,” Monika tells The Local.

Find out more about studying in Stockholm

When she first arrived in Sweden, Monika was surprised to discover how environmentally-friendly the Swedes are. It’s a far cry from what she was used to when she lived in Warsaw, where habits like recycling don’t tend to be part of everyday life.

“It was a big shock for me how everyone is so environment-focused,” says Monika. “For example, I was really surprised at how much people recycle and how eco-friendly everything is.”

True to Swedish form, Stockholm University offers a range of courses and programmes with a sustainability focus, like its master's programme in Social-Ecological Resilience for Sustainable Development. You can find out more about the many master’s programmes which are taught in English right here.

For many, one of the biggest surprises about studying in Sweden is how informal things can be compared to at universities elsewhere in the world. From calling professors by their first names to independent group projects, students take more responsibility for their learning and are treated more like colleagues than pupils.

“University life in Sweden is a lot less formal than back home,” says Monika. “In Poland, you have to address your professors by their titles. I find Sweden to be a lot more friendly and the relationship between students and professors is a lot more straightforward.”

Set in the Frescati area, which is part of the Royal National City Park, Stockholm University’s main campus is just three stops away by metro from the city centre whilst still being completely immersed in nature. In fact, it’s a famous feature of the city that you’re never far away from a lush green area or a vast open lake.

For Dora Peric, one of Monika’s classmates who hails from Croatia, studying in Stockholm has exceeded her expectations by far. She is particularly fond of the Swedish capital’s hip Södermalm neighbourhood – where she likes to stroll during the weekends. “Studying here is even better than I imagined it to be,” says Peric. “The city, the people, the professors, and the classes – it’s all really nice and Stockholm University is a really good organization.”

Find out more about studying in Stockholm

For some international students, Sweden’s more democratic and collaborative learning process can come as a surprise. According to Dora, it doesn’t make the education at Stockholm University – which is in the top 100 on the Academic Ranking of World Universities – any less rigorous.

“In Sweden, you learn step-by-step and it’s never last moment learning,” she says. “This was new to me because at my home university in Croatia it was more like: ‘Here is your book – see you in two months.’ But in Sweden, you have a lot of seminars and workshops to help you along the way.”

Dora’s enthusiasm for Sweden has also spilled over to her relationship with the Swedish climate – which some students can find hard to adapt to.

“I don’t mind the cold or dark that much,” she says. “There are fun things to do when it gets dark like Christmas markets and ice skating, for example. I also think I’ll go skiing with my classmates in January.”

Singaporean biology student Xing, who thought the Swedish climate would take a toll on her given the heat and humidity of her home country, is equally unconcerned about the onset of the Swedish winter. In fact, like Dora, she has already made plans with friends to go ice skating and skiing – as well as exploring the city and its outskirts.

“I’m already getting used to the cold,” says Xing. “Until recently, I’ve been taking jogs, and on the weekends, my friends and I explore the greater Stockholm area. Last weekend we went to Sigtuna for example and we are planning to take trips to other European countries as well.”


Singaporean biology student Xing on her way to the last lecture of the day.

Xing had researched more than the Swedish weather before her arrival. Reading up on the internet, she learned about the country’s famous commitment to equality as well as its reputation for safety. During her time in Sweden, she has found reality to live up to these expectations.

“Sweden has a lot of emphasis on equality,” says Xing. “Everyone is very nice and friendly here and Sweden is definitely a quite safe country to live in.”

German student Philipp Wallkum, who, like Monika and Dora, joined Stockholm University a few months ago, finds Swedish culture and society quite similar to Germany (albeit the weather slightly colder). Even so, his time in Stockholm so far has been a journey of discovery – and much of that journey has been done on foot.

“I have discovered a lot of Stockholm on foot like Djurgården, Södermalm, and the Archipelago, including Vaxholm,” says Wallkum. “I also like to go to cafes in the city and try out Swedish sweets at places like the coffeeshop Vete-Katten.”

From intensive exchange semesters to competitive English-taught degrees at all levels, Stockholm University offers many opportunities for international students. Learn more about these opportunities and what it’s like to study in Sweden here.