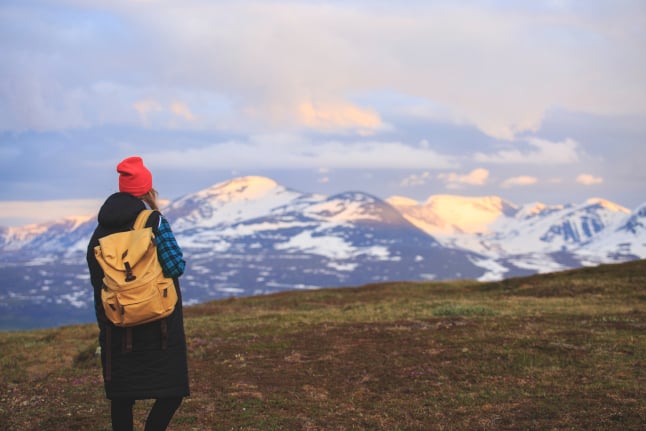 Mass tourism and changes to technology both pose a threat to Sweden's open access to nature. Photo: Alexander Hall/imagebank.sweden.se

“Allemansrätten (The Right to Public Access) is of really great importance for Sweden. It is the foundation of outdoor activities for each and every Swede,” says Nils Hallberg, a legal adviser at the Swedish Environmental Protection Agency (Naturvårdsverket).

“You're welcome to go almost everywhere you want. It's one of those bits and pieces on an international scale that defines Swedes and Sweden.”

Yet the Swedes have partly lost their connection with nature over recent decades, he says. Most Swedes live in towns and cities these days. Photo: Per Pixel Petersson/imagebank.sweden.se

According to the urban development agency of the European Union, 85 percent of the Swedish population today live in towns and cities.

“As in many other parts of the world we see an urbanization trend going on,” notes Hallberg.

“People are moving to the larger cities. For Sweden these areas are Stockholm, Gothenburg and Malmö. You can meet people who are born and raised within the city limits of Stockholm that have never been outside the paved roads. That part of the population is less connected to nature these days.”

“But then we also have a strong trend around friluftsliv [literally 'outdoor lifestyle']. It's based on the belief that you should live a sound life, that you activate yourself, work out a lot, eat healthily and be healthy. It makes people want to go out in nature.”

This allows even Swedes who live in cities and urban areas to spend time exploring Swedish nature, but that comes with its downsides when more of the people enjoying allemansrätt haven't grown up in these areas.

“Up in the north of Sweden we have a lot of mountains, it's a harsh environment that can be very dangerous from time to time,” explains Hallberg.

“There are avalanches and very severe weather situations. We see a trend that the people who visit these places are not as well prepared as they used to be. There are a lot of beginners who don't really know what to expect or don't have the right knowledge to handle things when nature kicks back at you.” Over the years, Hallberg has seen a change the ways in which people spend time in nature.

Broadly speaking, previously more people spent time simply being outside and enjoying nature in an unstructured way, whereas the recent trend is towards more organised recreation where sports and activities are central.

“The entire concept of allemansrätt itself took form in the 1930s, 40s and 50s. At that time they said it's ok to ride a bike on somebody else's land any time and as much as you want,” says Hallberg.

“But at that time a bike was like 50 kilos of raw steel, one gear, and if you even were thinking of leaving the road you would get stuck within ten metres. That concept, that it's allowed to ride a bike, still applies today while bikes have developed technologically over the years.”

“We have a constant discussion of whether the concept of allemansrätten as we always have seen it is still valid for the future due to the technical development of different sports. We see people going further and pushing harder.”

HIKING GUIDE: How to walk the world's northernmost pilgrimage trail It's not just Swedes who benefit from allemansrätten. In recent years, the number of tourists visiting Sweden has grown by around ten percent a year. While a large proportion of these visitors stay in the cities, Swedish nature is becoming increasingly popular among overseas visitors, and this exposes vulnerable areas to potential threats.

“At various spots around the country we see mass tourism coming up,” Hallberg says.

“The ability to take advantage of allemansrätten in certain areas can also cause problems like damage to terrains because too many people walk the same routes. Every person might be within the limits of allemansrätten, but when you have them in tens of thousands it suddenly gets too much for nature to bear. That's an ongoing discussion and an issue that we need to handle for the future.”

The influence of social media on tourism in Sweden is also an unpredictable factor, putting specific popular locations under pressure.

“It's hard to foresee where these hot spots are,” Hallberg says.

“It's hard to foresee the patterns of where these people will go and what they will do when they get there. From a governmental and management perspective we try to work out tools to handle this kind of tourism.” Despite the challenges, Hallberg doesn't think it likely that allemansrätt and the liberties it brings will disappear any time soon, noting:

“We're really proud of allemansrätten and we will do whatever we can to maintain it. It's still a very important part of Swedish society.”