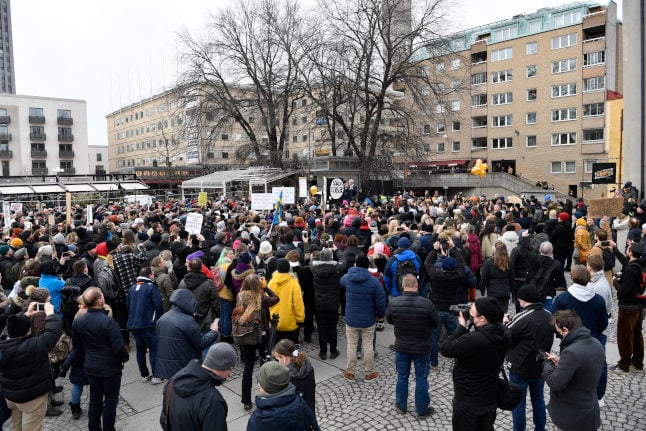 The demonstration was held in Stockholm on Saturday. Photo: Henrik Montgomery/TT

Who was behind the Stockholm march?

Saturday’s march, called The Thousand-man March for Freedom and Truth, was arranged by Filip Sjöström, a former student at KTH Royal Institute of Technology.

On his Facebook page, Sjöström describes the Covid-19 epidemic as a “plandemic”, a reference to a pair of widely debunked viral conspiracy theory videos, which claim that Covid-19 was designed by a collaboration between labs in the US and in Wuhan, China, that the flu vaccine makes you more susceptible to coronavirus, and that wearing face masks “activates your own virus”.

“We refuse to follow a whole load of laws which have been created on the back of a pandemic which in my opinion does not even exist,” he wrote on the group’s page.

How many people turned up and what was the atmosphere like?

According to Swedish police, 600 people attended the march. They carried banners bearing slogans such as “Vaccine Experiment”, “Sweden is sick, Stop 5G”, and “The media is the virus”. Swedish public broadcaster SVT reported that there were also signs that were “critical of immigration and Louis Pasteur”, a French 19th century biologist involved in creating some of the first vaccines in history.

When police broke up the demonstration, taking away 50 protesters in bus, most of those remaining refused to disperse, instead marching towards the Kungsträdgården park, with five police officers lightly injured trying to bring them under control. Another officer had to be taken to hospital.

What will happen to the organisers?

Sjöström risks receiving a fine of 20,000 kronor for organising an event with more than the eight allowed people, according to Helena Remnerud, who leads the inspection division at Stockholm’s country administrative board. This would make him the first person in Sweden fined under the pandemic law which came into force in January. While police removed 50 demonstrators, no one was arrested.

How have the authorities in Sweden reacted?

Sweden’s interior minister, Mikael Damberg, told the TT newswire that the attack on police was “not only unacceptable but also a serious crime that can lead to a prison sentence”.

He said it was irresponsible for the protesters to break the eight-person limit.

“This is not the time for big gatherings. Following the public order law is not voluntary. The eight-person maximum for demonstrations is there for an important reason, which is to reduce the spread of infection.”

“Right now, there are a whole load of movements on the internet which don’t believe in either coronavirus or the vaccine,” he told the Aftonbladet newspaper. “All I can really say is: “Come here to out hospital and see what life is like. It won’t take long to convince you that this is a dangerous, deadly disease.”

How does the Stockholm march compare to others in Europe?

There have been other demonstrations in Sweden before, focusing on specific measures – such as restaurant owners or theatre workers calling for financial aid following tougher rules – but none on the scale of Saturday’s protest, or those seen in many other countries. There have also been demonstrations calling for further pandemic restrictions.

Germany has been the hardest hit by anti-lockdown protests, with more than a dozen major protests so far, with the largest taking place in November when more than 20,000 protesters attended a rally in Leipzig and 10,000 in Berlin. A joint study by ZEW and HU Berlin, published in February, concluded that between 16,000 and 21,000 infections could have been prevented if the rallies had not taken place.

In Denmark, a group called Men in Black has held demonstrations of about 1,000 people in February, and in The Netherlands, 180 people were arrested at the end of January after three nights of consecutive violent protests.

Why is it significant?

Sweden’s government and public health agency have frequently cited the low level of public resistance in Sweden as evidence that the country’s relatively light-touch restrictions are more sustainable than the tougher lockdown approach taken by other countries.

Sweden long relied on more voluntary measures than many other countries, coupled with binding restrictions on specific parts of society, for example the limit on public gatherings, and closures of non-essential public services. In recent months it has been stepping up its binding rules, and plans to extend its pandemic law which would give the government increased powers to order private businesses to shut down.