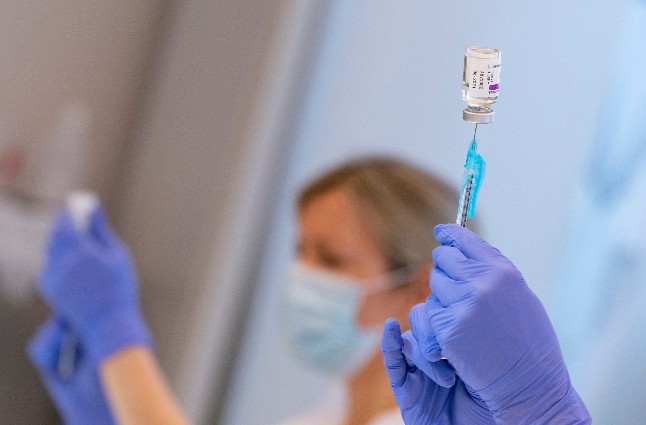 A nurse in Malmö prepares to administer the AstraZeneca vaccine before the suspension. Photo: Johan Nilsson/TT

It comes after a small number reports of serious blood clots in people who had recently received the jab.

At his weekly press conference, Anders Tegnell said that the decision had partly been taken to prioritise vaccination of the elderly and partly because these side effects had only been reported in those under the age of 55.

“We have concluded that AstraZeneca is an extremely effective vaccine and that the elderly are in great need of protection against Covid-19, not least when we can see that the spread of infection is growing,” he said, shortly after the decision was announced in a press release.

Among the elderly, among whom no cases of the rare side effect have been reported, and who are at a so much higher risk of becoming seriously ill with Covid-19, he said, the benefits were much, much greater than any risk.

After the European Medicines Agency last Thursday concluded its preliminary review into the safety of the vaccine, judging that the benefits continued to outweigh the risks, most countries in Europe resumed their use of the vaccine. The agency said a causal link between the vaccine and clotting was not proven, but that it was possible this was the case.

But Denmark, Sweden, and Norway and Finland each opted to keep the suspension in place while they carried out further analysis of both the EMA’s findings and cases in their own countries.

Sweden’s decision came shortly after decisions from its neighbours Denmark and Finland, with Finland opting on Wednesday to resume use of vaccine, also only for those over the age of 65, and Denmark on Thursday morning opting to extend the suspension of the vaccine a further three weeks. Norway is set to announce its decision on Friday.

Tegnell said that vaccinations of over-65s using the AstraZeneca jab would begin early next week, “as fast as the regions can get going”.

After that, it will take a few weeks before a decision is made on whether to use the AstraZeneca vaccine in other age groups.

“We will see in a few weeks if we can vaccinate a bigger group,” he said.

Asked by The Local if the small potential risk of serious side effects would have been sufficient to justify withholding the vaccine from the under 65s even if all the over 65s had already been vaccinated, he said it would have.

“That’s a hypothetical question, but I think we would still feel more confident in waiting and having a continued pause, like some countries have done, to get some more information on how we could avoid the risk even more,” he said.

Asked by the Financial Times how worried he was about the risk of this rare possible side effect involving blood clots, low levels of platelets and bleeding events, he said these  “were a very rare event at any time” in the under 55s, but that now there seemed to be “a few more of those cases around, but still very, very rare”.

“We believe it’s good and necessary to have a bit more knowledge about how rare it is, and how we need to deal with it, and if it’s possible to find risk factors behind it so that we can avoid [these events], because they are very, very serious and often fatal.”

Sweden is currently in the second phase of its vaccination programme, meaning the vaccine is offered to people aged over 65 (the oldest first), people in certain risk groups including transplant recipients, and healthcare staff working in close contact with people in these categories.

Ulla Wändel Liminga, the head of medical safety at the Swedish Medical Products Agency, told the press conference that the European Medicines Agency was continuing its investigation into the rare possible side effect, with an updated conclusion expected at the Easter break.

“Among other things, it’s about understanding if there is a mechanical explanation as to whether this is caused by the vaccine and also if there are specific groups that one can rule out,” she said.

Possible explanations being investigated, she said, included whether some people have a genetic susceptibility, whether it is an immunological reaction, whether it is to do with the way the injection is given, and whether the side effect might work in a similar way to Heparin-induced thrombocytopenia.

The Swedish Medical Products Agency on Wednesday published a statement reiterating its judgement that “the benefits outweigh the risks” when using the AstraZeneca vaccine, despite “a possible association with very rare cases of blood clots and low platelet levels.”

Health workers in Sweden, it said, “should be aware of signs and symptoms consistent with thromboembolism and/or thrombocytopenia”.

They should seek medical attention immediately if they experience “difficulty breathing, chest pain, leg swelling, persistent abdominal pain”, and also if they experience “persistent headaches or blurred vision”, or bruising or petechia (small red spots) on areas other than the vaccination area.”