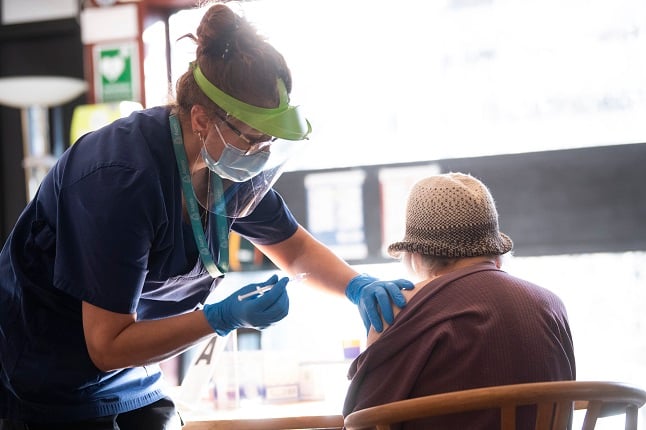 Nationwide, two thirds of over-80s have received at least one dose of a Covid-19 vaccine. Photo: Fredrik Sandberg/TT

Vaccine coordinator Richard Bergström has said that based on current forecasts, five million adults would have received both doses of the vaccine by June 30th, and a further 2-2.5 million would have had one dose.

Sweden’s total adult population is around 8.2 million people, and the initial target was to offer the Covid-19 vaccination to all adults as well as children in risk groups in the first six months of 2021.

“It is going to take a bit longer before everyone has been fully vaccinated, but perhaps five million will be fully vaccinated in the first half of the year,” Bergström told SVT’s Helgstudion programme.

This new forecast assumes that currently planned vaccine deliveries to Sweden will go ahead as scheduled.

It comes after the Swedish Public Health Agency adjusted down the forecasted vaccine deliveries during the first six months. In December, the agency expected regions to receive 17.4 million vaccine doses by June 2020, but that figure is now 12.5 million, with many of those not forecast to arrive before June.

Some regions had already expressed doubt they would achieve the June target.

Stockholm in February postponed its target by a few weeks with the aim to vaccinate all eligible Stockholmers by mid-July, and SKR, the umbrella organisation for Sweden’s municipalities and regions, has said that even the target of vaccinating 80 percent of over-70s nationwide by the end of April now looks difficult to achieve.

So far, slightly more than one million Swedes or 12 percent of the adult population have had their first dose since the programme began just after Christmas. Among the elderly, 84 percent of all over-90s and 66 percent of all over-80s have now received at least one dose of vaccine.

All Swedish regions have now started the second phase of vaccinations, and you can check your region’s website or regional information on 1177.se to find out what applies where you live. In the first phase, Covid-19 vaccines were offered to residents of elderly care homes and elderly people receiving at-home care, as well as healthcare workers in close contact with these people.

The second phase includes all adults aged over 65, starting with the oldest. This group also includes people in certain risk groups and healthcare staff who have close contact with others in the second phase, but the Public Health Agency recently adjusted its vaccine priority order to focus more closely on old age.