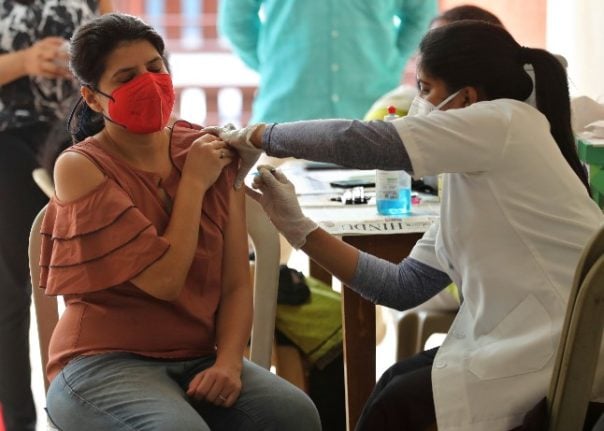 Will it be possible to receive one jab of AstraZeneca's vaccine in, for example, India and then the second in Sweden. Photo: Aijaz Rahi/AP

Cross-border vaccine coordination is still in its early stages, so this question and many others are still not yet officially decided on.

The Local asked Sweden’s state epidemiologist Anders Tegnell what he thought about combining vaccine doses at home and abroad and he said that “theoretically, it’s possible”, but that it was currently unclear what international documentation would be accepted.

“Of course, it also creates problems because you need documentation from the first country that you really had a first dose of something before they can give you the second one,” he said.

He said that the coordination work being done between European Union countries around the Green Digital Certificate vaccine pass would probably provide some answers on the issue.

“Those kinds of problems are also being raised in that work, and I think that will clarify how we can transfer, in a quality assured manner, how vaccines are being given in one country so that we can see it in a second country,” he said. “But, unfortunately, we’re not quite there yet.”

The reader also asked if, should someone get a first vaccine in another country, there would be a way to request a second dose of the same vaccine on arrival in Sweden.

Tegnell said that the decision on what vaccine to use would be made by the region or person giving the vaccination based on the information given to them.

“They will then take a decision on what is the most appropriate second dose that you should be given in Sweden, or perhaps the person will be so unsure about the first dose that they might recommend that you get two doses,” he said. “So at this stage, this would be handled on an individual level.”

The vaccine should be free for everyone living in Sweden, even people without a personnummer or samordningsnummer. However, not having a Swedish identity number may mean that you don’t get contacted when the vaccine is available. You should try to keep up to date with the information from your region, and to register with a doctor’s office if possible, so that you will know when it’s your turn.

Do you have a question about how the Covid-19 vaccinations will work, or about life in Sweden in general? Email our editorial team at [email protected] and we will try to answer if we can (we receive a lot of emails so we may not be able to reply personally to everyone).