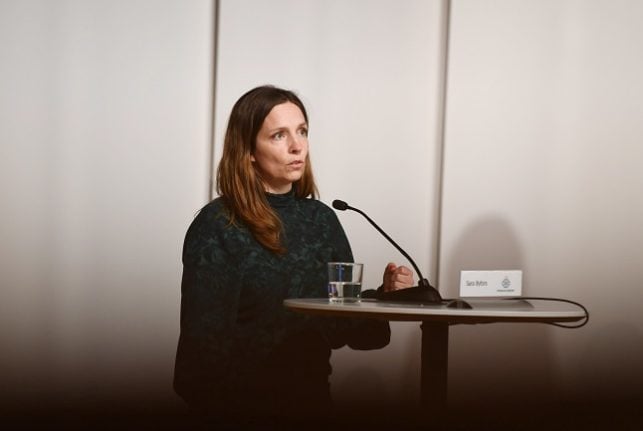 Sweden currently has an extremely high spread of Covid-19 compared to the rest of the EU, the Public Health Agency's Sara Byfors reported on Tuesday. Photo: Carl-Olof Zimmerman/TT

“What stands out is that cases among children and young people are increasing, among those between 0-19 years,” said the Public Health Agency’s Sara Byfors, adding that this could be partly due to the fact that guidelines around contact tracing have recently changed so more children are being tested for the virus.

In the oldest age group, there was a much clearer drop in new reported cases, which the agency believes is largely due to the impact of the vaccination rollout.

Looking at the country as a whole, there was a small week-on-week reduction in newly reported cases, although the rate was still extremely high.

“We have a high spread of infection in Sweden, including in relation to the rest of Europe,” said Byfors.

The 14-day incidence rate (new cases reported per 100,000 residents) is now at 691 nationwide, but varied between regions, reaching 1,124 in Västernorrland although even this figure was a slight reduction from the week before. In Kronoberg the figure was 1,003 and in Östergötland 918, with both regions showing a continued upward trend.

In the three largest regions, the 14-day incidence rates were 701 in Stockholm, 623 in Västra Götaland, and 583 in Skåne.

And within intensive care, the number of patients treated for Covid-19 had risen by 14 since the previous report, to 405. A further 1,522 people are currently receiving hospital care for the disease in wards other than intensive care.

“Caring for a person who is seriously ill with Covid-19 requires a huge amount of resources and a lot of staff, and it is very important that all of us help out by following the restrictions to help out the healthcare staff,” said the National Board of Health and Welfare’s Mattias Fredricson.

At the press conference, the authorities reiterated the importance of following national recommendations, in particular working from home whenever possible, only having close contact with your closest circle, and avoiding social events, for example refusing invitations to parties or dinners.

“The spread of infection is still high. We need to continue keeping distance, both indoors and outdoors, and not socialise with very many people. Work from home if it’s possible and avoid social events – dare to say no,” said Sara Byfors. “If you live in a region where there are further recommendations, those apply just as much as the national recommendations.”

She was asked by TV4 if the Public Health Agency was considering further restrictions on the national level.

She said there were no plans for this, but added that it would depend on the Covid-19 situation as to whether plans for larger public events to be allowed can go ahead. It is the government that decides on this, but it generally follows advice from the Public Health Agency which has already requested twice that the relaxations be postponed due to the severity of the third wave.