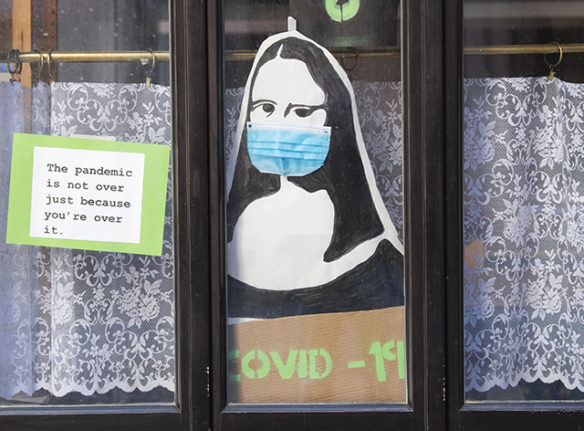 A sign in Stockholm in March. Photo: Fredrik Sandberg/TT

The country had a 14-day-notification rate of 577 cases per 100,000 inhabitants, according to the European Centre for Disease Prevention and Control.

Passing one million cases in early May, Sweden has been near the top, just after Cyprus, for weeks with new cases subsiding faster in the rest of Europe. Sweden saw a peak in mid-April with a 14-day-notification rate of over 800 cases per 100,000 people.

“Many countries in Europe have been at considerably higher levels than what we are seeing now, so it’s probably more about Sweden had a fairly late surge in this hopefully last third wave,” state epidemiologist Anders Tegnell told a press conference, lamenting that the caseload was still higher than last summer.

The Scandinavian country has never imposed the type of lockdown seen elsewhere in Europe, controversially relying on mostly non-coercive measures. It has gradually tightened restrictions since November, including a ban on alcohol sales after 8pm and on public gatherings of more than eight people.

Since March, cafes, bars and restaurants have also been required to shut by 8.30pm.

The total number of deaths associated with Covid-19 since the start of pandemic reached 14,351 on Thursday, putting Sweden in the middle of the pack in Europe, although well ahead of Nordic neighbours Finland, Norway and Denmark.

Mortality statistics also show that Sweden had a lower than average excess mortality in 2020, compared to the rest of Europe.

The chart below from Our World in Data compares Sweden’s infection rate to the EU average and the eight other countries covered by The Local, and you can add further countries to the chart for comparison.