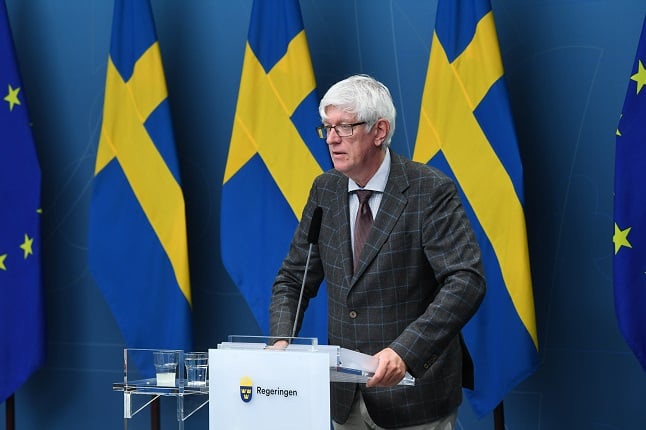 So far, the spread of the Delta variant is not considered serious enough to change the pandemic plan, but this may change. Photo: Fredrik Sandberg/TT

“We realise that it can be easy to get ahead of yourself; longing for normalcy, you start to neglect the restrictions. That must not be the case,” said Health and Social Affairs Minister Lena Hallengren. “The restrictions must be followed until they are lifted. They should be followed by everyone.”

The restrictions currently in place in Sweden that apply to the general public include working from home if possible, limiting social contacts only to your closest circle, keeping a distance from others and avoiding environments where there is a risk of crowding.

Even people who have been fully vaccinated against Covid-19 must currently follow these restrictions.

“To you who are older and are fully vaccinated: dare to live your life, but within the restrictions that apply,” said Hallengren.

The Public Health Agency’s general director Johan Carlson noted that newly reported Covid-19 cases are falling, while hospitalisations and ICU admissions linked to the disease are at their lowest levels in a long time.

“The most worrying aspect at the moment is the spread of the Delta variant,” he said, referring to the strain of Covid-19 which is also known as B.1.617.2 and was first discovered in India.

At the moment, the Delta variant has mostly been linked to regional outbreaks, including in Värmland, Blekinge and Kronoberg, but Carlson said is is “highly likely” that the variant is present in all or the majority of Sweden’s 21 regions.

According to Carlson, the known outbreaks have mostly been linked to “private situations where people did not follow the recommendations and advice that is in place” and emphasised the need for everyone to continue adapting their everyday life, including during holidays like Midsummer.

Under the current plan, which saw the first easing of restrictions from June 1st, the next set of relaxations would be brought in from July 1st. Those would include further increases of the number of people allowed at public events, extended opening hours for bars and restaurants, and removal of the advice to meet only people within your closest circle.

Whether those changes can go ahead as planned depends largely on public behaviour, Carlson said.

“The better the development goes, the greater the compliance with rules and recommendations, then the faster we get down to levels [of infection] that are reasonable for us to take action,” he said.

Asked by TT about why measures were not yet being adapted, Carlson said that general measures to curb the spread of the coronavirus should be effective against all variants. In Blekinge and Kronoberg, although the Delta variant has been identified there has not been an overall rise in cases, and although that has been the case in Värmland, the rise was from a comparatively low level. On that basis, Carlson said no new measures were judged necessary yet, but that this may be the case in future.

Individual regions have also introduced local measures to limit the spread of the variant, including in Värmland where changes were made to recommendations around sport and leisure activities as well as contact tracing rules for people vaccinated with only one dose.