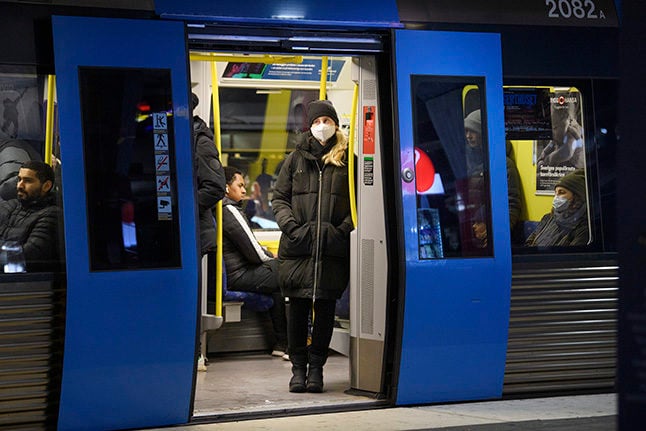 Only some people wear a mask on the tunnelbana in Stockholm. Photo: Jessica Gow / TT

1. Swedish people aren’t as good at following rules as we thought

Sweden has primarily used non-coercive measures to curb the spread of the virus, relying on individual responsibility to socially distance. But many regions have repeatedly reported low public compliance with guidance.

Take the tunnelbana in Stockholm during rush hour and you’ll likely be met with a carriage full of mask-less commuters, despite the recommendations to keep a distance and wear a mask at all times.

During the pandemic, many citizens did reduce their contact with others, or went into self-isolation, but some went in the other direction and protested the relatively relaxed restrictions.

Perhaps Swedes are more rebellious than we previously assumed.

2. Nothing will get in the way of the right to roam

Freedom of movement is enshrined in the Swedish constitution and a global pandemic wasn’t going to stop that. While some countries imposed lockdowns, curfews and mandatory quarantines, Sweden didn’t.

Although people were asked to “think about whether travel is really necessary,” many still went on skiing holidays during the winter peak in infections.

The Public Health Agency has said that if they hadn’t allowed domestic travel for the summer holidays, people would have done it anyway – but in an uncontrolled way.

Proof that allemansrätten (the “right to roam”) applies to more than just hiking.

3. We may never use cash again

When was the last time you touched a 100 kronor bill? The transformation to a cashless society was already well underway before the pandemic began (Sweden launched its first cashless, unmanned shops years ago), but it has certainly sped it up.

Now, even more supermarkets have added automated checkout options or ask customers to avoid cash if possible, while several banks have raised the threshold on contactless payments.

4. Even Swedes can fall out of love with the government…

Criticism of the government’s treatment of the pandemic has been rife, and trust in the government has fallen dramatically. Only 34 percent of the population thought Prime Minister Stefan Löfven was handling the crisis well in June 2020.

Many people within Sweden’s scientific and medical community have written op-eds criticising the government’s strategy. At the very start of the pandemic, over 2,000 academics signed an open letter imploring the government to impose stricter restrictions. 5. …but criticising authority isn’t without backlash

Freedom of expression is also protected by the constitution, but that hasn’t stopped critics of Sweden’s strategy facing fierce backlash in the public arena, leading some to say they have stopped speaking in the media on the topic or have even left the country as a result.

Norway’s state epidemiologist Frode Forland reported abuse after he said he did not agree with the Swedish strategy entirely. Readers of The Local have reported receiving xenophobic social media abuse after criticising the government’s strategy.

And public health officials have also reported facing threats for doing their job, showing just how polarised and toxic the debate has become.

Throughout the pandemic, Sweden made keeping schools open a priority. Schools  were never stopped on a nationwide level from offering in-person classes for children under 16, despite multiple outbreaks. On the whole, schools have adapted rather than closed, though distance learning was a possibility in cases where local authorities judged it necessary.

Thankfully, doctors at the Karolinska Institute have found a low incidence of severe Covid-19 symptoms among children.

7. Swedish society is not as equal as we thought

Like everywhere, in Sweden the virus exacerbated existing inequalities to deadly consequence. Covid-29 took a shocking toll on the most vulnerable parts of the population.

Poorer suburban communities suffered some of the worst outbreaks. Foreign-born people were not only disproportionately affected by the virus, but have also been vaccinated at a lower rate than native Swedes, while there have also been significantly higher mortality rates among groups with lower incomes and lower levels of education.

None of this is unique to Sweden, but as a country frequently thought of as one of the most egalitarian societies in the world, it feels starker to see inequalities laid so bare.

While Swedish workers have taken to working from home quite well, rates of loneliness among unemployed people have skyrocketed during the pandemic.

Although early on in the crisis, it was a common joke that social distancing wouldn’t be a problem for Sweden’s reserved population, the restrictions on socialising have taken a toll on mental health.

9. Lagom doesn’t work in a crisis

Rather than clear rules, there has been confusing messaging around mask-wearing, gatherings, and the exact distance you need to keep, placing the burden of making risk assessments on individuals (is it 1.5 metres, two, or an arm’s length? Or is it an arm’s length?).

Sweden’s recommendations have stood out while the rest of Europe has mostly responded to the pandemic with decrees, laws, and precise guidelines. Balance and lagom is great in many situations, but less so during a global pandemic.

This past year has seen articles from big publications around the world either lauding the so-called “Swedish strategy” or calling it a disaster, often based largely on which narrative suits their domestic agenda. Pundits on all sides of the political spectrum have jumped on Sweden as a case-study for good or bad.

This phenomenon is not new; aspects of Swedish culture have been misrepresented overseas for years, whether it’s Swedish immigration policy used as a horror story by right-wing politicians, local news stories overblown to present an inaccurate picture, or popular culture perpetuating stereotypes.

As usual, the reality is much more complicated than black or white. It will likely be several years before we can know the full impact of the pandemic here and elsewhere.