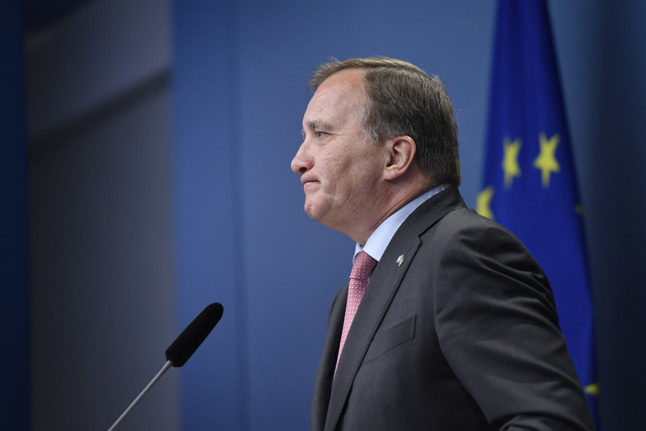 Stefan Löfven is still Prime Minister after having resigned on Monday, but has reduced powers. Photo: Stina Stjernkvist / TT

What can it do?

A transitional government (övergångsregering in Swedish) has largely the same powers as an ordinary government, but it can’t call for elections.

In addition, there is a practice that says that the transitional government should not present “politically controversial” proposals.

“For example, one should not go forward with bills, make important appointments, write regulatory letters or respond to interpellations if it can not be justified,” Jan Teorell, professor of political science, at Stockholm University, told the TT newswire.

According to Teorell, however, certain exceptions can be made if a delay in an issue would harm important public interests, so he doesn’t think that the rule will affect the government’s handling of the pandemic. However, it could be a problem if the pandemic drags on and the government needs to reintroduce restrictions.

“If there are political disagreements about what to do, it will be difficult for the government to proceed, if you do not want to break with practice or refer to the clause of public interest,” he said.

Löfven remains in his role as Prime Minister until he is officially replaced, and in a transitional government, the resigning ministers maintain their positions.

One of Löfven’s ministers, Rural Affairs Minister Jennie Nilsson, has actually resigned her post to re-enter parliament so that she can vote with her party in any prime ministerial vote, but that’s for a specific reason. When she took up the ministerial post, another Social Democrat replaced her as an MP, but her replacement has been absent on sick leave. With the very close split in the current parliament, a single vote could be decisive, prompting Nilsson to return to her seat.

How long will the transitional government be in place?

The website of the Swedish parliament says, “A transitional government is in place until a new government takes office”.

A new government takes office after the speaker of parliament proposes a prime ministerial candidate who then passes a parliamentary vote. This happens if a majority of MPs do not vote against the candidate (so abstentions effectively work as votes in favour).

This happens through a process of talmansrundor, where the speaker talks to the leaders of the different parties to find out which alliances are possible, before giving a candidate the job of trying to build enough support for the government. That candidate then reports back to the speaker, who can put forward a parliamentary vote on the candidate.

There is no time limit on how long the process can take, but it ends either when a prime ministerial candidate is found who has the backing of a parliamentary majority (at which point that candidate is voted in and forms a government), or when candidates have been proposed four times and all failed the vote (at which point a snap election has to be called).

So… how long will it take?

Speaker Andreas Norlen has said he hopes to have a new government in place by the end of July, and that his plan is to call for a new vote on a PM candidate each week.

Teorell is hopeful that the process will move quickly. “It would surprise me if it becomes a long process. Parliament cannot itself call for by-elections, but it can do so by voting down four presidential proposals. If the Speaker knows that a majority in the parliament intends to do so, then he will make two or four proposals in quick succession and then it will take a maximum of a few weeks,” he said.