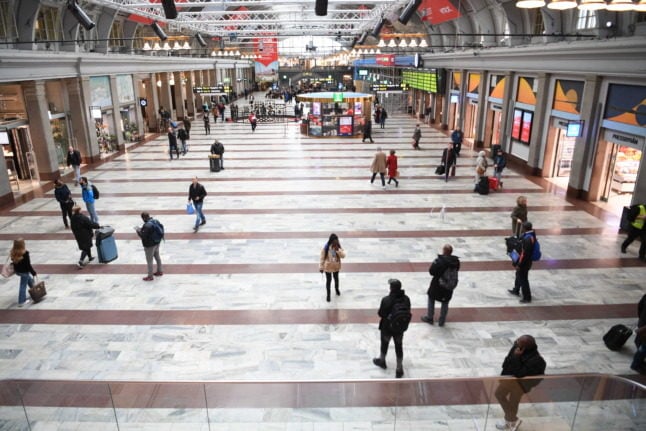 Starting this week, there will no longer be loudspeaker announcements at train stations, unless trains are delayed or cancelled, reports the Swedish Transport Administration (Trafikverket).

Previously, at 86 of Sweden’s 481 train stations with loudspeakers – including Gothenburg Central and Stockholm Central – announcements were given for every departing train, not just those with delays or cancellations.

“We want it to be clearer for travellers that a loudspeaker announcement means some sort of change in the train journey, this could for example be a changed time, track, or some other urgent message,” said Tomas Gustafsson, head of department at the Swedish Transport Administration.

The decision has met criticism from the spokesperson of the Swedish Association of the Visually Impaired, Niklas Mattsson. In a report from P4 Halland, he was disappointed, explaining news of the decision was “difficult”.

“This is something we thought we were having a discussion about, and suddenly they come with this decision. I think people need to try and think: ‘If I couldn’t see, what kind of information would I want to have?’,” said Mattsson.

Swedish chicken has received a “red light” in the Word Wildlife Fund (WWF)’s yearly meat guide. The reasoning behind the decision is that it does not meet climate and animal welfare standards, TT reports.

Foods receiving a green light can be eaten sometimes, where those with a yellow light still have some issues. A red light means “avoid, or place higher demands” on food.

Newspaper Upsala Nya Tidning reports that Sweden’s coronavirus strategy contributed to the disease spreading from Sweden to other countries.

“In the first year of the current pandemic, Sweden was actually a netto exporter of the Sars-Cov-2 virus to our Nordic neighbours,” said Uppsala researcher John Pettersson, to the newspaper.

The study, carried out by researchers at Uppsala University, the Norwegian Public Health Authority and the University of Sydney, Australia, is presented in the European Centre for Disease Prevention and Control’s newspaper Eurosurveillance, TT reports.

The study showed that chains of transmission originating in Sweden made their way to other countries in several hundred cases. It is believed that this is due to Sweden’s less restrictive coronavirus strategy in comparison with neighbouring countries.

“Finland received the most cases of such virus export from Sweden, despite the country having stricter travel restrictions. It was probably Finns, not covered by the Finnish travel ban, who brought the infection back from Sweden when they returned home. Conversely, we see almost no virus export from Finland to Sweden,” said Pettersson.