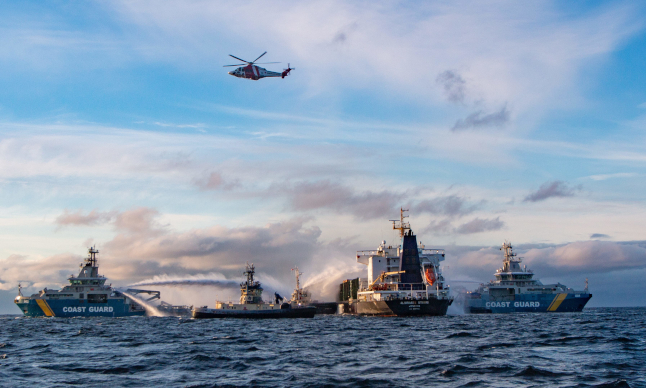 A fire on board the Almirante Storni ship off the coast of Gothenburg was under control but not yet extinguished in the early hours of Tuesday. Photo: Kustbevakningen/via TT

Eleven cases of the new Omicron variant (B.1.1.529) of the coronavirus have so far been confirmed in Sweden, according to the Public Health Agency’s latest update. So far, seven of these infections were confirmed in returning travellers and another four had had close contact with someone who had recently returned from international travel.

Five of the people who are infected live in the southern Skåne region, two live in Jönköping and four live in Stockholm, reports Swedish news agency TT. Based on what we know so far, they appear to have come down with relatively mild Covid symptoms.

The WHO designated Omicron as a “variant of concern” in late November after it was first discovered by South Africa, but much remains unknown about the variant. More information is expected in the coming weeks as researchers continue to collect data.

The month of December has so far been around 5-10C colder than normal compared to the period 1991-2020, reports the TT news agency. And yesterday, the tiny settlement of Naimakka on the border to Finland set a new record this season with a shivering -43.8C.

Sweden is set for another frosty day on Tuesday, with trains cancelled even in the far north. Temperatures are expected to start edging up again from Wednesday onwards.

Sweden’s new minister for public administration, Ida Karkiainen, 33, has said she has “no memory” of making a Hitler salute after right-wing populist site Nyheter Idag published a picture of her extending her right arm at a party when she was in her mid-teens.

“If I did, it was done ironically or to ridicule that kind of ideology,” she told public broadcaster SVT in an interview where she also described Nazism as “despicable”. She denied making a Hitler salute in an interview with the Expressen tabloid, which also published the picture.

Fire not yet extinguished on ship in Gothenburg archipelago

A fire that started on Saturday afternoon on board the cargo ship Almirante Storni off the western Swedish coast was described as having been brought under control in the early hours of Tuesday. But firefighters were still working on extinguishing it completely.

The 177 metre ship, sailing under Liberia’s flag, is currently lying anchored near Vinga island in the Gothenburg archipelago. The blaze started when the ship’s timber freight caught fire, but the flames have not spread to the rest of the ship. The ship’s crew of 17 people are still on board, and the Swedish Coast Guard’s ships are on standby at the scene.