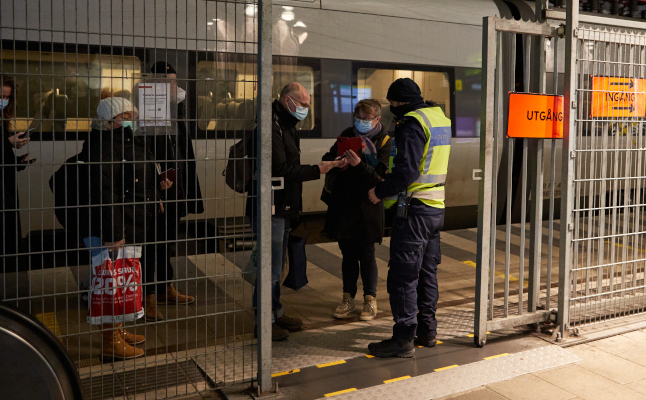 Please note this article has not yet been updated to reflect the new Covid rules that Sweden will bring in on January 21st.

The test must have been carried out 48 hours before the test result document is checked when you enter Sweden – not 48 hours after you get the result, and not 48 hours after departure, so make sure you plan your trip carefully, especially if it’s a long-distance connecting flight.

The test certificate must also include the following information, and be written in Swedish, Danish, Norwegian, English or French:

The Public Health Agency’s initial guidance stated that the negative test must be an antigen test or PCR/NAAT. After initial confusion about whether or not all NAAT tests were included, an expert at the agency confirmed to The Local on December 28th that the only NAAT tests that are accepted as valid are PCR, TMA or LAMP, and said that its website would be updated to make that distinction clear.

The requirement to show a negative test applies to those over the age of 12 and regardless of where in the world you are travelling from, and whether or not you are vaccinated. If you belong to a category of traveller which has to present a negative test and you don’t do so, or if your flight is delayed so that you arrive in Sweden later than 48 hours after it was carried out, border police may refuse entry.

That said, other than that, previous exemptions from showing a Covid test generally still apply. That means, among other things, that Swedish citizens and foreign residents who can prove they live in Sweden have the right to enter without showing a negative test.

You can find a full list of exemptions on the Swedish Police Authority’s website. You can also read more about the new rules on the government’s website. It is ultimately up to the border officials to decide whether or not to accept your documents, and be aware that some airlines may have their own rules.

Note that is is still not possible to travel from some countries to Sweden as a tourist, even if you can show a negative test, and these rules will continue to apply after December 28th. There are also different rules for “exempt” non-EU countries and “approved” non-EU countries.

But from December 28th, everyone has to show a negative test, so in practice, this means:

People who have a vaccine pass issued in an “approved” country may travel to Sweden, but in addition to the vaccine pass they also need to show a negative test no older than 48 hours. Note that people travelling from these countries must still be fully vaccinated, unless their country is also “exempt”.

People from exempt countries still have to show a negative test no older than 48 hours (as opposed to 72 hours, which was previously the case).

People travelling from the EU, including Nordic countries Denmark, Norway, Finland and Iceland, also need to show a negative test, regardless of vaccination status.

People who frequently commute across the Swedish border for work or studies can choose to either show a negative test no older than a week, or a valid vaccine pass.

As of mid-January, The Public Health Agency no longer recommends that everyone get an additional test after arriving in Sweden.

The Public Health Agency has asked the government to scrap the requirement for a negative test and reintroduce the Covid vaccine pass, but no decision has yet been made on this. When it comes to long-distance public transport (more than 150 kilometres), there are no further guidelines for the public than what applies in general: avoid public transport if possible, try to keep a distance to other people and wear a face mask if it’s crowded.

Public transport operators are on the other hand from December 28th obliged to “as far as possible” ensure that each passenger has access to a seat or a bed (depending on the kind of train), according to the Public Health Agency’s regulations. They must also inform passengers and staff of how to avoid the spread of infection, and follow up and document all the infection control measures they’ve put in place.

Make sure you read up on what Covid rules apply in the country you’re travelling to and any countries you’re travelling through. If you got vaccinated in Sweden and have a personnummer or samordningsnummer you can get a Swedish Covid pass via covidbevis.se – if you apply online, you should get your pass almost immediately, but if you have to apply by post the waiting times are several weeks.

If you need a negative Covid test to travel, note that travel certificates are not free in Sweden, so you’ll have to pay for your test. You can find a list of healthcare providers that offer certificates linked to the Covid pass scheme on the eHealth Agency’s website.

Passengers are recommended to wear a face mask in airports, but this is not enforced and based on what The Local has been told by readers, is only very loosely adhered to – so that is perhaps something you will want to be aware of if you’re flying from Sweden.

The above information was correct to the best of our knowledge at the time of publication. Please be aware that we are not a government authority and cannot issue any guarantees about whether or not you will be able to travel to Sweden. We always advise readers to also consult the official information on the Swedish border police’s website before travelling.

SYSTEMBOLAGET
When can you buy alcohol in Sweden on New Year’s Eve?
Url copied to clipboard!