A shelter located in the basement of an apartment building. Photo: Adam Wrafter/SvD/TT

Sweden’s 65,000 shelters have enough space for 7 million people, and are mainly for use in larger towns and cities which can be difficult to evacuate. You can recognise them easily – all shelters display a sign comprising of a blue triangle inside an orange square, over the word skyddsrum in capital letters.

Which shelter do I belong to?

You are not assigned a specific shelter, but are advised to attend the shelter closest to your location. They are often located in apartment cellars, but can also be found in metro stations or commercial buildings.

Don’t worry if your apartment building’s shelter is currently used for another purpose, such as bike parking or for storage. Shelters are designed to be used for other purposes in peacetime, and must be emptied within 48 hours’ notice by the building’s owner in the event of an alarm.

A full list of Sweden’s shelters is available here – just type in your address in the top left-hand corner under sök skyddsrum to find out where your nearest shelter is.

How do I know when to go there?

Have you ever heard an unexplained loud honking noise around 3pm on a Monday? That’s “Hoarse Fredrik”, Sweden’s alarm system used for warning the population in the event of a life-threatening situation in peacetime.

The siren system is tested in populated areas all over Sweden, on the first Monday of March, June, September and December at three o’clock on the dot. If you hear Hoarse Fredrik outside of these times, he’s warning the public of danger such as a big fire or an explosion.

But this signal (seven-second blasts interspersed with 14-second silence, followed by a longer signal which indicates ‘hazard over’) does NOT mean you should head to your nearest shelter, only that you should go inside, close all windows and turn on Swedish public radio.

In wartime, on the other hand, the air raid alarm (which consists of a signal with regular two-second bursts, lasting for a minute in total) will instead be used, and when you hear that you should head to your nearest shelter, and again, turn on the radio.

What facilities are there in a shelter?

In a shelter which has been correctly prepared, there should be water, heating, ventilation and toilets. There is no food. The Swedish Civil Contingencies Agency recommends that you take the following with you:

A complete checklist is available on pages 10 and 11 of the agency’s brochure, “If Crisis or War Comes”.

Shelters are designed to protect against gases used in war, as well as shockwaves and shrapnel from a bomb weighing up to 250 kilos. They should be able to provide shelter for up to three days.

The best you're likely to find in most Swedish villages is a pizzeria. Photo: Helena Landstedt/TT

Partly, it’s the deadening hand of regulation, partly it’s puritanism, but mostly, according to the historians The Local has spoken to, Sweden’s lacklustre country pub life comes down to geography and economics. Most of Sweden has simply been too sparsely populated and too poor to support thriving hostelries.

According to Richard Tellström, a food historian at Stockholm University, the coaching inns or gästgivaregård set up across Sweden on the orders of King Erik XIV back in 1561, were later forbidden from serving alcohol to locals.

“Of course, since this is Sweden, they were regulated, and they were not allowed to sell drinks to people living nearby,” he tells The Local. “They were only open to those who were travellers. They were not a public bar for locals.”

This meant that although coaching inns were from 1615 required to be set up at intervals of one and a half landskapsmil (about 16 kilometres) along all the major roads in Sweden, they never developed into centres for the local community, like their counterparts did in the UK, Germany or France.

This is not to say that there was nowhere for locals to drink in Swedish villages.

“There were, of course, many illegal bars in the countryside. A lot of women, especially widows, were running illegal bars as way of making money,” he says. “You made alcohol at home, and your neighbours came to you and you sold them spirits and beer. They were very simple. You had them in the kitchen.”

Remarkably, given the later Lutheran stance on alcohol, churches were also allowed to sell alcohol to help the local pastor support themselves.

“During the 1600s, we even had church bars in Sweden, not actually in the church, but outside it, so the vicar could make some money serving alcohol before and after the Sunday mass,” Tellström says.

But none of these establishments left their mark on the fabric of villages in the way that historic pubs, cafés and gasthaus have elsewhere in Europe.

“They have vanished, all of them, since they were illegal,” Tellström explains.

As for the gästgivaregård, most disappeared when railways ended the coaching system. It was only really in Sweden’s southernmost county, Skåne, that they managed to repurpose themselves as country restaurants. 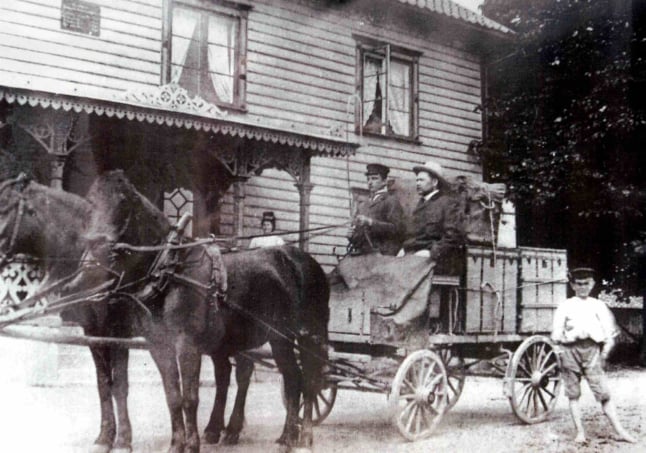 A picture that shows a gästgivaregård the way they used to look. Photo: Johan Främst/Forshems gästgiveri/TT

According to Mats Morell, Professor Emeritus of Economic History at Uppsala University, Sweden’s poverty and low population density until the late 19th century meant that there were few villages of sufficient scale to support a restaurant, or café.

“If you go back in history, the villages were more or less hamlets: five or a maximum of ten farms and a few crops, and in many cases, there was a single farm and then you had a kilometre and a half to the next one.”

This lack of rural density was exacerbated by the Great Partition land reforms, which from 1750 onwards split up villages across Sweden, so that each landowner had their land in the same place.

As a result, the Swedish countryside was turned into a succession of large farms, without any agglomerations.

The big exceptions to this were the counties of Skåne and Dalarna. Skåne’s rich arable land meant it could be more densely populated than the rest of Sweden, leaving it with today’s dense network of pretty villages.

Dalarna had bigger villages because the county’s strong tradition of making crafts meant agriculture was not the only source of sustenance, and later because its villages resisted the land reforms. 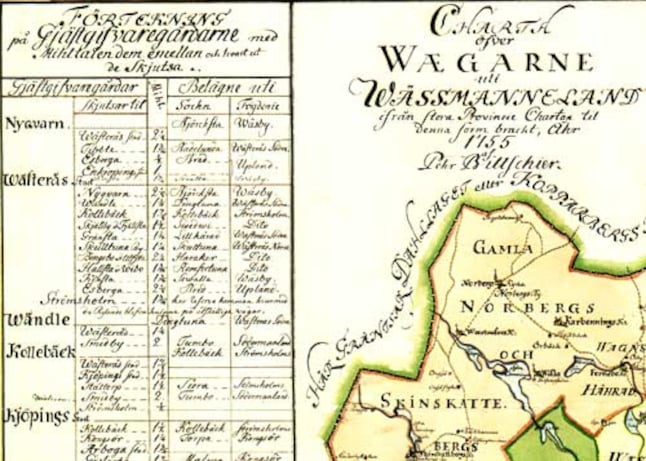 Even in parts of the country where there were no bars, there was still alcohol, however, with Swedes traditionally brewing weak ale, and from 16th century distilling brännvin, at home.

“We had the same ale as you have in Britain in Sweden until the 1850s,” Tellström says. “We didn’t have any pilsner [or lager].”

Tellstöm is sceptical of the idea that Sweden was ravaged by alcoholism until the strict regulation of the early 20th century.

“I think it only became a huge problem during the 1800s. And that is related to how you make brännvin,” he says. “You take the grain and potatoes that you can’t eat to make liquor, so you must have a surplus of grain and potato, otherwise you will starve to death during the winter.”

This put a natural limit on how many bottles of spirits a typical farmstead could make. It was only during the 1800s, when cheap grain started to be imported, and brännvin made industrially, that spirits drinking became a serious problem.

When that happened, however, it triggered a moral panic that still restricts Swedish pub life today.

First came the temperance movement, which paradoxically improved the social life in many Swedish villages, with temperance organisations often building villages’ first community centres, which would then host dances and coffee meetings.

Here’s a poster from 1951 advertising a play my dad acted in at a Midsummer event organised by the temperance movement in Bruzaholm, rural Småland. It says “coffee, milk, sandwiches, squash, soft drinks” are on offer, and promises a “first-class speaker system”. Tickets: 1.50 SEK pic.twitter.com/RjnuPzix9s

Many of the bygdegård community centres you find across Sweden, which can today be hired for weddings and parties, were set up by temperance organisations or by Baptist or Methodist churches, Tellström says.

“But since these churches are always, I would say, related to a temperance idea, they don’t serve alcohol. That is why we started to drink coffee in Sweden, so coffee becomes the sort of social drink.”

So unlike in parts of Britain, where the temperance movement sometimes took over pubs and converted them to temperance pubs or closed them down, in Sweden it built social centres where none had existed before. 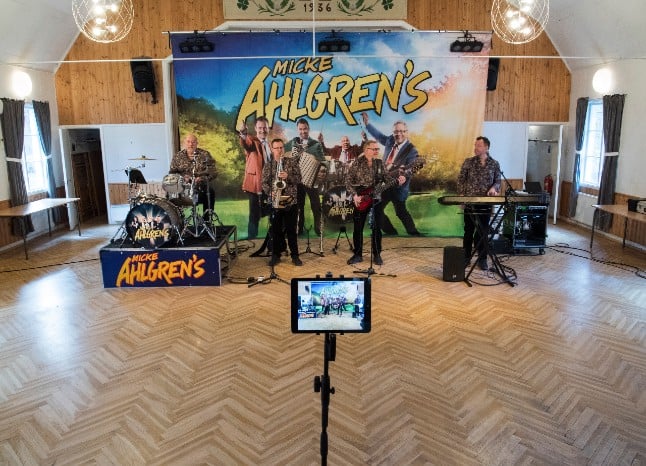 A ban rehearses in a bygdegård community centre outside Enköping. Many were built by the temperance movement. Photo: Fredrik Sandberg/TT

The concerns over alcoholism led the government in 1905 to establish a monopoly over sales of spirits (although many country distilleries continued regardless).

In 1922, the government established a rationing system, with an alcohol ration book, which imposed lower consumption on working class men, than on professionals.

Then, in 1938, it nationalised all ‘third-class restaurants’. Since the 1850s, establishments could only sell alcohol if they also served hot food, so this effectively nationalised everything which might have developed into a working class pub, turning them into drab government-run canteens until the monopoly was ended in 1955.

According to Morell, by the first half of the 1900s, Swedish country life became much more lively. The country was becoming more prosperous, railways were connecting many villages, causing them to quickly grow into small towns.

“If you go back to the 1940s, there was quite a lot more going on in the countryside,” he says of the 1950s. “In my little home parish, there was a dancing place, and a sort of a community house, which was owned by the Good Templers, a temperance organisation, and it collected rather many people.”

“There was also political engagement, the Agrarian Party, Bondeförbundet, which was much stronger and they fixed a barn dance every week. But there was no pub culture or bar culture.”

It was only when Swedes moved to the cities en masse in the 1950s and 1960s that this village life disappeared.

More often than not, all that remains is a charmless pizzeria.

HISTORY
Did you know? The Scandinavians never spoke of themselves as Vikings
Url copied to clipboard!