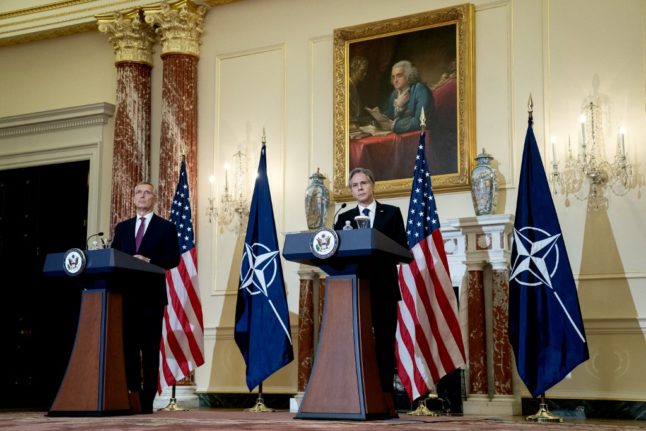 Secretary-General Jens Stoltenberg said he would convene senior officials from the three nations in Brussels in the coming days “to ensure that we make progress on the applications of Finland and Sweden to join Nato.”

“My intention is to have this in place before the Nato summit” in Madrid starting on June 28, Stoltenberg said on a visit to Washington.

“Finland and Sweden have made it clear that they are ready to sit down and to address the concerns expressed by Turkey,” Stoltenberg told a joint news conference with US Secretary of State Antony Blinken.

Sweden and Finland have historically tried to steer clear of angering nearby Russia but shed their reluctance to join Nato after Moscow’s invasion of Ukraine — which had unsuccessfully sought to join the alliance.

But all 30 Nato members need to agree to admit a new member and Turkey has voiced objections, citing the presence in the two Nordic nations of militants from the PKK, the Kurdish separatist group considered terrorists by Ankara.

“We know that no other Nato ally has had suffered more terrorist attacks than Turkey,” Stoltenberg said.

Blinken reiterated that he remained “very confident” that Nato will “move forward” with the membership of the two nations.

He appeared to play down linking the membership to Turkey’s desire to buy F-16 fighter jets, as some pundits believe Ankara is holding out for concessions.

“These are separate questions. We have a longstanding and ongoing defence relationship with Turkey as a Nato ally,” Blinken said. “We’ll continue to work through cases as they as they arise with regard to systems that Turkey seeks to acquire,” Blinken said.

The United State expelled Turkey in 2019 from development of the state-of-the-art F-35 in retaliation for Ankara’s purchase of an advanced air defense system from Russia.

But Turkey’s image has risen in the United States through its drones that it has sold to Ukraine, even as Ankara avoids sanctions on Russia.

Turkish news outlets have reported that a delegation from Sweden’s Ministry of Justice will be in Turkey October 5th-6th, and that the scheduled talks will deal with “the extradition of criminal terrorists” from Sweden to Turkey. The Ministry of Justice confirmed to TT that this meeting would take place, and that it would involve senior officials rather than ministers.

While non-Swedish citizens can be extradited, this can only happen when the extradition is in line with Swedish law and the European Convention on Extradition.

Sweden’s outgoing foreign minister Ann Linde said on Tuesday that the Nato talks with Turkey were “moving along nicely”.

“My judgement is that Turkey will say ‘yes’ to Swedish Nato membership, however, I do not know when that will be,” she said.

An agreement was signed in Madrid this June by Turkey, Sweden, and Finland, which has also submitted an application for Nato membership. Under that agreement, Turkey lifted its objections to the two countries’ Nato applications. Among the topics covered in that agreement were terrorism, arms exports, and extraditions.

Moderate Party leader Ulf Kristersson has said he will keep Oscar Stenström, the diplomat appointed by the Social Democrats to lead Sweden’s Nato process, in place when he takes over as Sweden’s new Prime Minister later this month.

Only two of Nato’s 30 members have still to ratify Sweden and Finland’s accession: Turkey and Hungary.