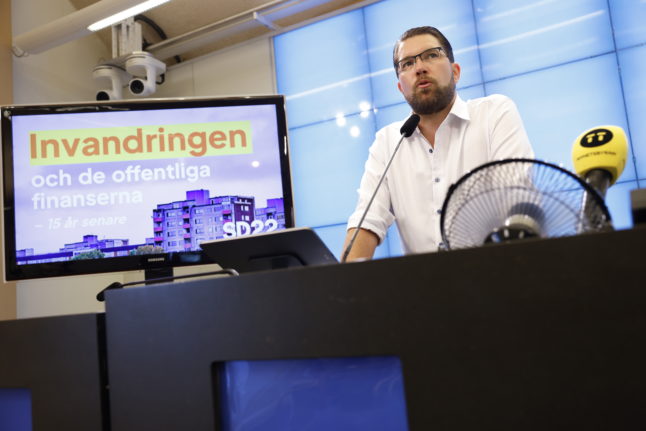 According to the SVT poll, the Sweden Democrats now have the support of 21.5 percent of voters, compared to 17.4 percent for the Moderates,.

“This sets out the playing field between now and the election,” said Torbjörn Sjöström, Novus’s chief executive, about the poll.

He stressed, however, that the new daily polls, which are based on just three days of interviews, would be more volatile than the polling agency’s normal polls, but would also make it possible to better understand how opinion is swinging back and forth as the campaign progresses.

“You should see this as showing the score in a match which will not be finished until the whistle blows on election day,” he said. “This doesn’t say anything about the future. If you lead a match three-nil in the first half, you’re in a good position, but you have not won.”

“Now we’re on a sprint for the last bit of the election campaign,” it said. “The SVT Novus poll shows that we’re starting to catch up with the Sossarna [The Social Democrats]. Welcome on board the victory train.”

Figures on the economic right opposed to the Moderates’ decision to try to take power with the support of the Sweden Democrats, used the poll to argue that rather than weakening the populist party, the strategy had strengthened it.

“If I was Ulf Kristersson, I would be extremely worried over today’s Novus, to put it mildly,” wrote Tove Hovemyr, from the Green liberal thinktank Fores. “It’s going so well – this idea that if you get close to SD, both in mandate tactics and policy, it will become smaller. It’s a small price to pay. Yeah, right.”

Sjöström also told SVT that there was a large margin of error in the poll, making it impossible to know for certain if the Sweden Democrats were as far ahead of the Moderates as they seemed to be.

“This survey shows that it is statistically certain that the Sweden Democrats would be bigger than the Moderates if there were an election today, but exactly how large that difference is is affected by the margin of error.”