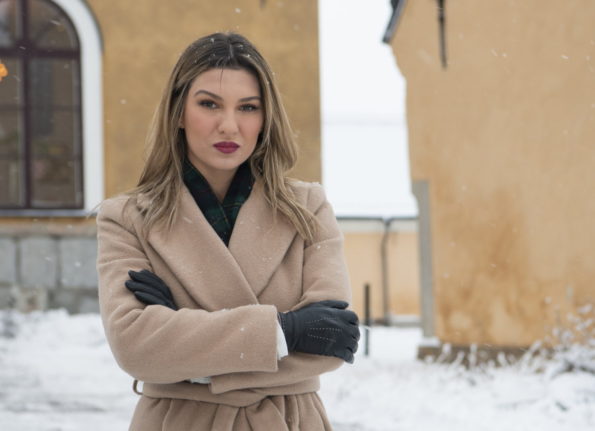 Rebecka Fallenkvist, photographed at the launch of Riks TV at the the start of this year. Photo: Sofia Ekström / SvD/TT

The clip of a drunken Fallenkvist repeating the phrase and apparently raising her arm went viral on Swedish Twitter, with many seeing it as an off-colour pun on “Hell Seger”, the Swedish translation of Nazi slogan ”Sieg Heil”, which has a history of usage within the violent Nordic neo-Nazi group Nordiska motståndsrörelsen, NMR.

She starts by saying, Helg seger, which means “weekend victory”, only with the words reversed. She then goes on to say “this is a segerhelg [victory weekend]. This is a segertåg [victory train — a reference to the Stockholm Metro train the party decked out in its colours], and a victory weekend for us.”

Fallenkvist, who has fronted anti-Islamic segments as presenter on the Sweden Democrats’ Riks web television channel, told the Dagens Nyheter newspaper that she had had “a little too much refreshment”, at the time of the interview.

She told the Expressen newspaper earlier that she had deliberately said ”Helg Seger” to wind up the media, and stimulate the “customary over-interpretations”, but withdrew this when talking to DN.

Fallenkvist’s outburst was not the only controversy to hit the Sweden Democrats on Monday. After left-wing and foreign language media (including The Local) were refused places at the party’s election day vigil, the party’s chief of staff, Linus Bylund, joked that he was looking forward to “a lot of work actually, and a lot of what we like to call ‘journalist rugby’.”

Asked what ‘journalist rugby’ involved, he said “att man knuffar journalister“, which means roughly, “that you push journalists about”.

A third scandal came when the Sweden Democrat MP Richard Jomshof was interviewed by Expressen about the coming talks with the Moderates.

“Everything should be on the table. The Prime Minister position, ministerial posts, committees in the parliament, we need to talk about everything. But at the same time we have to be humble: getting policies through is, as Jimmie Åkesson has said, is the priority.”

Asked if he wanted to have Jimmie Åkesson as Prime Minister, he said, “I’d like that. If you ask me, that would be very nice indeed. But as we say, getting policies through is the priority.”

Bylund dismissed Jomshof’s statement, saying he was not expressing the party’s official view. “Jomshof talks a lot,” he said. “Period.”