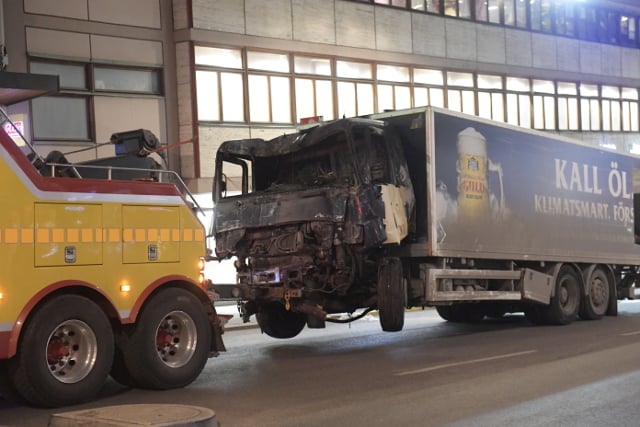 The truck used in the April attack in Stockholm. Photo: Maja Suslin/TT

In the months before the suspected terror attack, Rakhmat Akilov had access to propaganda from jihadist leader Abu Saloh through an intermediary, including sermons about the need for violent jihad, the public broadcaster reports.

The propaganda is mostly spread through Russian social media site Odnoklassniki, where the anonymous intermediary has added Akilov as a friend, meaning he could receive the propaganda which is mostly aimed at migrant workers from Central Asia.

Among the profiles in the network are several people saying they come from or live in Sweden.

Saloh is the leader of an Uzbek Islamist group which is fighting in Syria and has links to Al Qaida. He is suspected of planning terror attacks in the past, and is wanted by Interpol for terror crimes and financing terror. The digital trail also leads to an Uzbek extremist training site, according to Sveriges Radio, where there are instruction videos on how to use different weapons.

It is not clear whether Akilov himself communicated with the extremists in the network however. Terror export Magnus Ranstorp told the radio station that the information is nonetheless noteworthy:

“It's undeniably interesting because it shows in part that there could be some kind of link there, that has to be investigated. But it also shows that social media can play a major role”.

Akilov, 39, has confessed to driving the truck in the April attack in Stockholm in which five people were killed. He admitted to committing a “terrorist crime” during a remand hearing at Stockholm District Court last month.

On Wednesday the prosecutor in the case asked for more time to continue the preliminary investigation into the suspected terror case.

“Substantial investigative matters remain, such as further interviews, analyses, surveys and technical investigations before the investigation can be completed,” Hans Ihrman said in a statement.