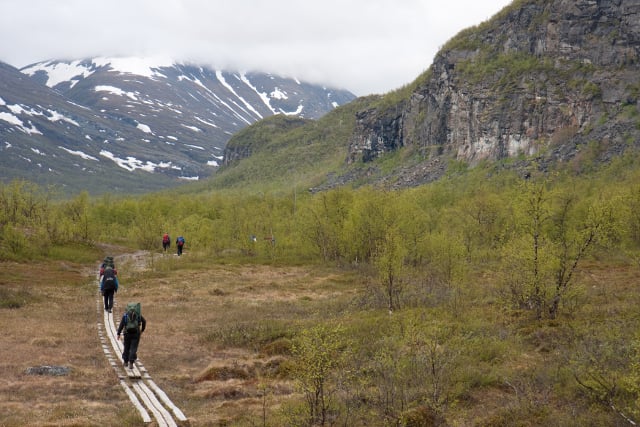 Make sure you bring the right equipment when hiking in the Swedish mountains. Photo: Fredrik Broman/imagebank.sweden.se

“We're seeing that interest in hiking in the mountains has been on the increase for several years. More and more younger people and families with children are interested,” Carina Hakenäs of the Swedish Tourist Association told the TT news agency.

In July the number of nights spent at the organization's mountain stations and huts increased by seven percent compared to the same month last year, with around 49,000 visitors. In June around 114,000 stayed at their 225 hostels across Sweden – an 11 percent increase on last year.

The number of people hiking up Sweden's highest mountain Kebnekaise (Giebmegáisi in northern Sami) is expected to increase from 8,000 in previous years to around 10,000 this year, reports TT. There are no official statistics, because most visitors walk the western route up the mountain without a guide.

Around 700 people have so far this year climbed via the eastern route, which crosses a glacier and requires climbing and a guide, a large increase on last year's 100 climbers.

“The eastern route is more weather-dependant and it's a tougher route up,” said Hakenäs.

Kebnekaise's southern peak (2,097.1m above sea level) and northern peak (2,096.8m) are the two highest points in Sweden. The southern peak has had a habit of dropping in height for some years now however due to rising temperatures shrinking the glacier which forms its top. Sitting on the highest point of Sweden. Photo: Oliver Gee

Swedish authorities warned earlier this summer that there has been an increase in call-outs to mountain rescue services after beginner hikers head out without the right equipment.

“Some are so inexperienced they can't even find the path up to Kebnekaise. Many are prepared, but the share that comes unprepared is getting bigger and bigger. It's a bit like 'just call mountain rescue if it doesn't work out',” Roine Norström, retired police officer and mountain rescuer, told newspaper NSD last month.

READ ALSO: Woman calls out mountain rescue helicopter because she was tired

Tourism is increasing in other parts of Sweden too. Record numbers of international tourists, with China representing the biggest increase, have been heading for Stockholm this summer.

Read more about Sweden on The Local's travel pages here.