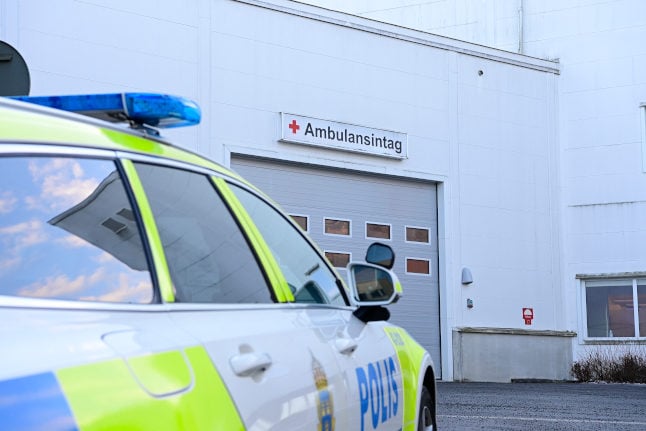 Police outside a hospital where some of the people injured in the Vetlanda attack are being treated. Photo: Mikael Fritzon/TT

At 2.54pm on March 3rd several calls were made to the police control room centre, informing them that several people had been attacked on or near the Bangårdsgatan street in central Vetlanda, a town of more than 13,000 people in southern Sweden.

Police confirmed on Thursday that the suspect was carrying a knife when he was apprehended, after being shot in the leg by police.

According to the latest information, seven people were injured in the attack (revised down from eight) and the suspect was also taken to hospital, after police stopped the bleeding to his leg.

The hospital said on Thursday morning that three people who were initially suffering from life-threatening injuries were now in stable condition, and a further two were seriously injured. Two had moderate injures and one had minor injuries. Everyone, including the suspect, remained in hospital on Thursday afternoon.

All seven victims are male, live in Vetlanda and were born between 1945 and 1985, said police on Thursday afternoon. There is no apparent connection between the suspect and the victims.

Who is the suspect?

Police have confirmed he is a 22-year-old with Afghan citizenship, previously known to police for petty crimes. He lives in the “Småland highlands” – an area in the Småland region that stretches across municipalities Aneby, Eksjö, Nässjö, Sävsjö, Tranås and Vetlanda.

Swedish media report he has lived in the Vetlanda area since 2018 and in 2019 was found guilty of a minor narcotics offence and fined, after using cannabis.

The identity of a suspect generally only becomes publicly known in Sweden once the prosecutor asks the court to remand them in custody (häkta). This decision must be made at the latest by noon on the third day after the prosecutor decides to detain the suspect (anhålla), which in turns happens after the person has been questioned.

According to the latest information from police on Thursday, the suspect has now been detained on suspicion of seven counts of attempted murder, and was briefly questioned overnight after being treated in hospital for non-life-threatening injuries. However, the questioning was mainly to inform him of the suspicions against him, and he had not yet told police his account of the events on Wednesday.

What is the motive?

The incident is currently formally classified as attempted murder.

After opening a preliminary investigation into attempted murder, police on Wednesday afternoon said that “details” that had emerged led them to also investigate possible terror motives.

But on Thursday they said the investigation was into attempted murder and not suspected terrorism, but that they were investigating whether or not there may be possible terror motives. “Motives are an important part of the investigation, because they could affect the classification of the crime, and we are carefully investigating,” police area chief Magdalena Grann told a press conference on Thursday afternoon.

There is currently no indication that more perpetrators were involved, according to police.