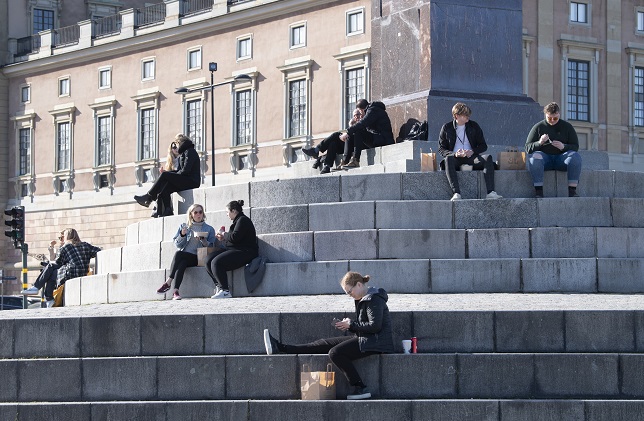 People enjoy a lunchbreak in the spring warmth in Stockholm. Photo: Fredrik Sandberg/TT

What’s the latest on Covid-19 from Sweden’s authorities?

At Tuesday’s press briefing from the authorities, state epidemiologist Anders Tegnell said that the 14-day incidence rate had reached 604 cases per 100,000 people and warned of a continued rise, but said he did not believe travel during the winter sports break was a driving factor behind the current rise in numbers. New restrictions would not be brought in for Easter, with authorities instead saying the key thing was for people to follow the measures currently in place.

Tegnell said the peak of the third wave was still to come but that he hoped it would happen in early April, sooner than last year when the peak came late in April. Reports of healthcare malpractice rose in 2020

The number of complaints about malpractice in healthcare and elderly care increased during 2020. Both staff members and individuals have the possibility to inform Sweden’s Healthcare Inspectorate (Ivo) if they suspect something has gone wrong, and last year these reports increased to over 9,000 compared to around 6,800 the year before.

“It probably has a connection to the pandemic. The number of cases involving healthcare has more than doubled and a large part of the increase can be explained by cases related to Covid-19,” Patrick Barringer, a department head at Ivo, told TT.

During the coronavirus pandemic, Sweden has suspended obligatory amortisation on mortgages in order to support the property market and individuals whose income was temporarily affected. This meant home-owners had the option to only pay interest on their mortgage.

But that will change on August 31st, with Sweden’s financial authority FI saying that the previous rules will return from that date. Under rules first introduced in 2016, people with a mortgage for 50 percent or more of their total property value must amortise at least one percent of the loan value each year. That rises to two percent for people whose loan accounts for 70 percent or more of the total value. Sweden’s Finance Minister is moving forward with plans to deactivate coordination numbers that are more than five years old or have been assigned to someone with a false identity, which means thousands of the numbers may be deactivated at the end of the year.

The numbers are given to people who are living in Sweden or for other reasons need the number to contact authorities, but in some cases the system can be abused.

The proposal also includes other aspects, including that municipalities and other authorities will be required to contact the Tax Agency if they suspect errors in the population register, and coordination number holders will need to report changes of address.

Sweden on Tuesday announced new coronavirus measures intended to reduce the risk of the virus spreading in museums, amusement parks and similar venues.

Coming into effect from Thursday March 25th, the rules will allow these venues to reopen but they will be subject to limits on the maximum number of visitors, and required to ensure national rules on social distancing and good hand hygiene can be followed. Read more about the rules here.