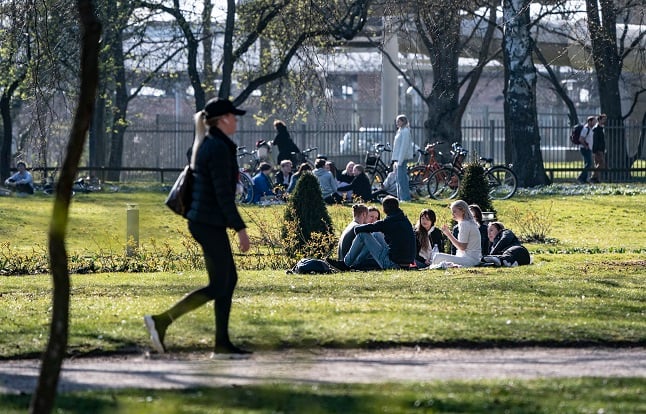 Building and retaining friendships can be hard when there are not only coronavirus restrictions to contend with, but also a wide range of views on how to interpret them. Photo: Johan Nilsson/TT

She was one of several readers who responded to our survey about how the pandemic has affected your friendships, both within and outside Sweden. International residents told us how they had adapted, in some cases met new people, and in others re-considered their friendships in a new light.

Gabrielle had only just started to meet people outside work when Covid-19 hit, after focusing on her pregnancy and newborn at the start of her time in Sweden. “The pandemic meant that those potential new friendships disappeared, and the others were barely there. We had no close friends and no way of making close friends. It’s been even more isolating than before.”

Gaia, from India, faced similar problems after moving to Sweden just before the pandemic began to affect daily life. Although she blamed the pandemic for not meeting many people, she said she had started to wonder if she would have developed close friendships even in normal times.

“The more I read about Sweden and how to survive this beautiful place, with its glorious summers and dark winters, the more I realize that I don’t think I would have any local friends even when Covid is a thing of the past.

“Being a person is who is naturally reserved but has developed skills of “kallt prat” [small talk] over the years, being part of an extremely populous nation where it cannot be avoided, I find myself wondering if I can survive the country in the long run,” she said, adding that she had also “never been more conscious” of her skin colour and wondered if this would affect friendships.

Pierce, who moved from the US to a small town in 2019, said the pandemic made clear to him the importance of a support network.

“The pandemic has emphasized how important it is to be able to build a friendship network of people you can trust in a difficult situation like this,” he said.

“Essentially it feels like I’ve gotten to reside here for two years without ever getting to live here yet. Everyone I know internationally is mentally exhausted, and well below operating at their best.”

As well as international moves, some readers had been forced to adapt to other major changes, including births and deaths, during the pandemic. Ed moved from the UK with his Swedish wife in 2017, who was diagnosed with cancer shortly before the move.

“Despite the wonderful care she received here, she died in January 2020. So since then I have lived on my own during the pandemic,” he told The Local.

He said that during the pandemic he has kept in touch with his wife’s friends and family, though they are scattered across the country, and has moved to her cabin on the island of Öland, but found some aspects of rural life hard.

“The people are kind and have supported me and I have made friendships which I do not think will ever go away. I am very lucky in that respect, but it has been difficult to develop friendships.”

It was advice from his late wife that has helped him make connections, although he is now also learning Swedish to chat with his new neighbours. “Swedish people love music. It is a real connector. If you like music, great. Eva told me to start playing the piano again: ‘It will help you integrate’. It has. Meet your neighbours, say ‘Hej’ to everyone you meet unless in a town or city.”

For other readers, different approaches to the coronavirus pandemic and Sweden’s strategy, emphasising individual responsibility, have driven a wedge between former friends.

An American engineer who moved for their studies said: “I have been very critical of the Swedish response or straight-up lack of response and it has damaged friendships, even with friends asking why I am choosing to live in Sweden if I think it’s so terrible. For the record, Sweden does a lot of things right but this pandemic response just hasn’t been one of them. I worry that this will really leave lasting damage with some friendships and it really brought out a lot of anti-immigrant sentiment.”

One Brit who moved for love said the pandemic had affected their relationship. “I cannot express any negative view of the Swedish corona strategy without [my partner] getting angry. We cannot discuss the Swedish situation together. It gets very heated and emotionally charged.”

Konstandinos, originally from Greece, said, “the friendships affected are mostly with my international friends, as they have from the beginning of the pandemic taken more serious social distancing, in contrast with all my Swedish friends that didn’t really care about it.”

Several readers however highlighted that they were grateful for the emphasis on personal responsibility, and the possibility to make their own decision about what they felt comfortable doing, with one reader saying they were pleased they were able to go to bars, and another saying they had “carried on as normal” in their rural area of Sweden, with parties for birthdays and Christmas.

Paul, who moved from the UK to be closer to his Swedish wife’s family during pandemic and had lived here previously, told The Local: “We are eternally grateful that for our children their social lives have been minimally affected here. Walks have become a really nice normal way to meet friends, such an easy low-risk solution and well-being boost that we take for granted yet is forbidden in some countries!”

Some respondents said they had been disappointed that friends had not checked in on them more often during the pandemic, and felt the pandemic had weakened their friendships.

A reader from Greece had a slightly different take: “On one hand I don’t think its right to judge a friendship or relationship during this time, no-one knows the struggle one person is going through. But on the other hand it’s difficult not to. I always wonder when and if things will turn to normal, will those ‘non-responsive for now’ friendships turn to normal also? Or will there always be the lingering question in your head, ‘why didn’t you try a bit more?'”

A reader from the US had a tip for staying in touch with friends without getting overwhelmed. “Keep a list of friends and then rotate and call or text with them, one a day. It helps to keep up with people and then it gives them time to have ‘new’ things to talk about, maybe new food or recipes, new games they are playing.”

Several readers told us how they had met fewer people, but managed to strengthen bonds with existing friends, focusing on their closest friendships.

Deepak, an Indian reader in Lund, said the pandemic had acted as a “filter” and urged him to put effort into friendships. “The pandemic for sure has put a strain on friendship. We can no longer take it for granted like we used to, each of us has to make concrete efforts to keep the bond strong.”

“Overall I believe [the pandemic] has strengthened my friendships as we learn more about each other’s beliefs and support each other during stressful times. In Sweden people respect differing opinions and try to do the right thing. There is no reason to lose friends over a philosophical difference,” said Donald, a US resident in Sweden for over a decade.

Several readers had arranged online meetups, both for friends in Sweden they could not see due to limits on socialising, and for international friends. Tips shared by The Local’s readers included ‘themed’ online events, such as cocktails or dinners, as well as board games, and being forgiving if friends are slow to reply or feel overwhelmed.

One reader who moved from an Asian country in 2016 said they felt they had become closer to their friends overseas, “in a sense that we have a little bit more time online, so we can discuss things more deeply.”

Finally, two readers credited their non-human friends with supporting them through a difficult year.

“I would often feel alone if I didn’t have my cat with me. Pets are surely great friends we should take care of too,” said Polish reader Aleksandra.

Thanks to everyone who responded to our survey, including those whose responses we could not include here. We edited some responses for grammar and clarity. If you have a question about life in Sweden or a story you’d like to share, contact our editorial team at [email protected]