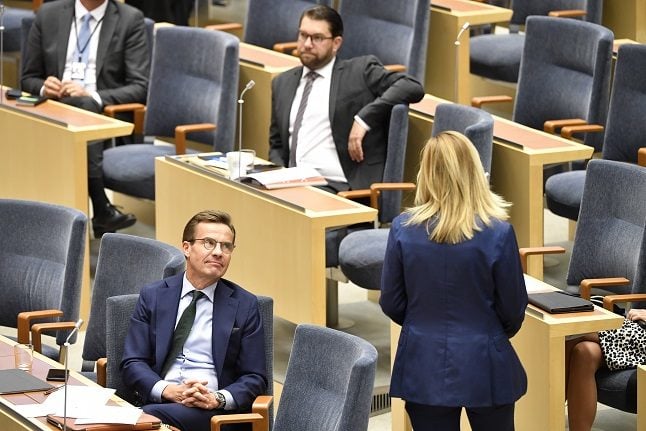 Sweden’s government has put forward a bill that would mean an overhaul of migration policy.

This is the first proposal to be signed jointly by the four parties, which all fall on the right of the political spectrum.

The Moderates and Christian Democrats are close political allies to the right of the political spectrum. Before 2020, they were part of a four-party Alliance with the Liberal Party as well as the Centre Party, who are not involved in the new proposal. Disagreements over what degree of cooperation with the Sweden Democrats was acceptable was the reason the Alliance broke down, so this new agreement is a sign of the increasing tolerance from right-of-centre parties towards the Sweden Democrats.

What are the proposals?

The proposals are a reaction to the migration bill put forward by the Social Democrat-Green government, which these four parties do not think goes far enough.

Under the proposals, a new basis for residence permits on “humanitarian grounds” would be limited, and would not apply to adults who have previously lived in Sweden with a residence permit and during that time developed a close connection to Sweden.

The four parties also want language requirements for permanent residence permits to be stricter than the government has set out, and included explicitly in legislation. They also want to put tighter limits on residence permits for relatives of people living in Sweden, including limiting exceptions to the so-called maintenance requirement (under which the family member already in Sweden must prove they have sufficient accommodation and income to support the relative applying for a permit).

Well, it puts some pressure on the government, now that four opposition parties have joined together behind the competing proposals. Prime Minister Stefan Löfven, in comments to TT, said the proposals showed Sweden Democrat leader Jimmie Åkesson was pulling the strings. Moderate leader Ulf Kristersson and Liberal leader Nyamko Sabuni denied this, with Sabuni saying the new proposals are based on a previous Liberal Party motion.

But the most likely outcome, most political commenters believe, is still that the government’s proposals would be passed.

The four parties behind the new proposals would currently be two seats short of a parliamentary majority. Meanwhile, it is likely that the centre-left government will be able to rely on support from the Left and Centre parties to get a majority in favour of its own bill — despite the Left Party criticising it as too restrictive.

What does it mean for Swedish politics?

It is the latest step in the normalisation of the Sweden Democrats. Christian Democrat leader Ebba Busch, as well as Kristersson, have said that more joint proposals are on the cards, on issues such as law and order, healthcare, or nuclear energy. But the party leaders have denied that this was the start of a conservative bloc.

In Sunday’s televised party leaders’ debate, it was clear that there are still significant differences between the parties’ stances, with Liberal leader Nyamko Sabuni and Sweden Democrat leader Jimmie Åkeson in particular going head-to-head.

Åkesson said he was not satisfied by the proposal and wanted a stricter migration policy, while Sabuni accused him of intolerance – at the same time asking her former ally, Centre Party leader Annie Lööf, if her intention was to “let the whole world in to Sweden”.

The traditional centre-right bloc of the Moderate, Christian Democrat, Liberal and Centre parties does not come close to building a majority, and based on current poll numbers, their best chance of getting into government is accepting cooperation with the Sweden Democrats.

However, the Centre Party has so far refused to accept this, instead cooperating with the centre-left government on policy issues, and strongly criticising the latest migration proposals.

Sweden needs to put forward a new migration law when its temporary migration policy, introduced in 2016 in response to the previous year’s increase in asylum seekers, expires this summer.

A parliamentary Migration Committee was set up to work out a new migration policy for Sweden, and it presented an over 600-page report last year. The Social Democrat-Green government then together a draft bill based on the proposal.

The opposition’s proposals will first be voted on in parliament’s Social Insurance Committee, where Moderate Leader Ulf Kristersson believes they will get a majority of votes, and then they would also be put to parliament.

The government’s proposals will also go to a parliamentary vote, and if passed, will become reality on July 20th, 2021.