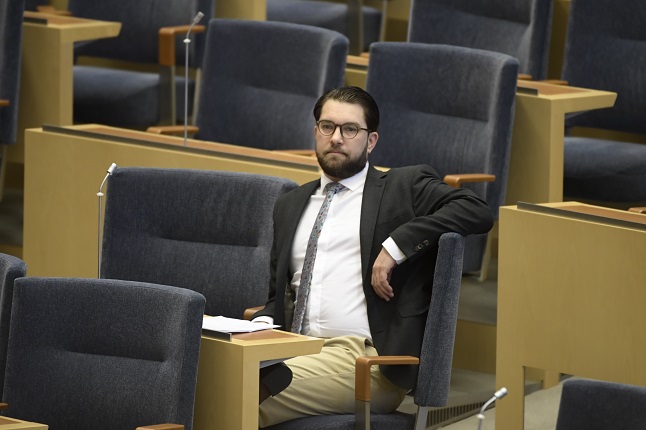 International media must develop a fuller understanding of Swedish politics beyond the rise of the far-right, argues our opinion writer. Photo: Carl-Olof Zimmerman/TT

Anyone who has followed international media coverage of Sweden over the past five or six years knows what interests news outlets about this small nation of 10 million: primarily immigrants, the Sweden Democrats (SD) and Covid-19.

So, when it was announced last month that Prime Minister Stefan Löfven had lost a vote of no confidence in the Swedish parliament, and, a week later, that he had resigned his position as Prime Minister, many could be forgiven for thinking that it was one of those three issues – immigration, the far-right or Covid-19 – that had brought about his downfall.

Yet, it was none of these. The issue that led to the first Prime Minister in Swedish history to be ousted from office before the end of his term was the honest, old-fashioned class issue of rent controls.

What’s more, the party that had placed the Social Democrats in the corner was not found on the political far right. It was a party with its roots in communism, the Left Party, that had put its foot down over the Social Democrats appeasing (from a Left Party perspective, at least) a centre-right policy in order to maintain support from the Centre and Liberal parties.

So, it was the Left Party, the Centre Party and the Liberals who were at the heart of the disagreement that led to the collapse of the Löfven government: parties that, combined, gained 22.1 percent of the national vote in the 2018 national elections (compared to 17.5 percent for SD), and played a key role in enabling the Social Democrats to maintain power. Yet, these parties have been, and still are, all but invisible in international reporting from Sweden.

In a personal, unpublished study I conducted on US/UK media coverage of the 2018 Swedish elections, I found that Swedish political parties were mentioned by name in these stories a total of 925 times, with SD accounting for 491 (51 percent) of those mentions.

The names of the Left Party, Centre Party and Liberals, on the other hand, appeared a combined 49 times, making up just 5 percent of all political party mentions. And when the leaders of Swedish parties were mentioned by name in these same articles (a total of 283 times), SD leader Jimmie Åkesson, was named the most often, with 124 (44 percent) mentions – almost twice as often as the Prime Minister, Stefan Löfven.

The Left, Centre and Liberal parties again fared badly, with the Left Party leader named 22 times, the Liberal leader mentioned once, and the Centre Party leader, Annie Lööf, never mentioned by name in 80 stories. In the same stories, issues related to immigration, refugees, crime and violence dominated as themes, while economic issues and welfare were conspicuous by their relative absence.

OK. So what? Surely the rise of SD and the arrival of refugees have been the definitive stories from Sweden over the past 10 years, and so it is hardly surprising that (other than Covid-19) they have dominated international news coverage of Sweden during that period? And this is about the economics of news. People living overseas just aren’t as interested in stories about Swedish rent control as they are in stories about immigration and the Sweden Democrats.

Here’s the problem with these positions.

First, by giving SD disproportionately heavy coverage, that party is given the power, directly or indirectly, to set the agenda for how Sweden is covered. Even negative coverage of SD makes the party’s positions the starting points for discussions. This is particularly true for immigration, where the focus on SD’s anti-immigration stance has meant that virtually no other party’s position on the topic is discussed abroad.

Second, as my relatively simple analysis of US/UK media showed, international coverage of SD is in large disproportion to their popularity among voters, while other parties with cumulative support beyond that of SD are given almost no coverage. When political crises such as the one facing Sweden today materialize, news consumers have little or no ability to comprehend what is going on because they have been fed a non-stop diet of stories that paint a simplistic vision of politics in Sweden, telling them nothing about the intricacies of a multi-party system.

Third, the huge focus on immigration in the international press clearly tells news consumers that all other issues fall to a distant second in Swedish politics. The collapse of the Löfven government due to a disagreement over rent controls is a stark reminder that Sweden is a country with issues related to class, economics and welfare that have existed before and after the arrival of refugees from Syria. Ironically, these are issues of social democracy central to Swedish political identity that have been lost in a sea of dystopian stories about immigrants.

Finally, it is not the role of journalism to tell the stories that people want to hear. It is the role of journalism to tell people stories they didn’t know they should hear. An overload of stories about refugees and the far-right may sell, but it does nothing to give people the context and background they need to understand the daily reality of political life. The Left Party, Centre Party and Liberals may not be sexy from an international news perspective…but, as we now see, they matter.