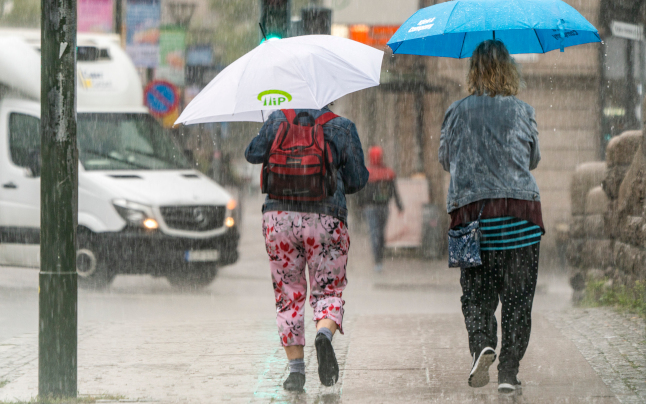 It rained in Malmö (pictured) on Tuesday, but some towns in Sweden got hit even worse. Photo: Johan Nilsson/TT

Heavy rain battered large parts of Sweden yesterday and continued into the early hours of Wednesday, with the Gävle region particularly affected. Several roads were flooded, and train traffic was disrupted in Gävle and Dalarna. Emergency services warned people of road damages and cautioned them not to head out on the roads if it’s still raining.

In Gävle, 140 millimetres came down between 8pm on Tuesday and 4am today, double in one night of the 70 millimetres that usually fall over the whole month of August, a meteorologist for Sweden’s national weather agency SMHI told the TT newswire.

Almost 800 foreign berry-pickers will be offered the Covid-19 vaccine in the Jämtland-Härjedalen region in the coming weeks, reports TT and newspaper Länstidningen Östersund. The Västernorrland region vaccinated just as many on Monday.

This comes after several cluster outbreaks among foreign workers, who travel to Sweden every year, often from Thailand, to make a living by picking berries.

Covid infections on the increase in Stockholm

New Covid-19 infections are increasing in Stockholm for the seventh week in a row. Stockholm health authorities noted a 20 percent increase last week compared to the week before, they write in a new update on their website.

A total of 2,177 new cases were confirmed between August 10th and 16th, and 62 Covid-19 patients are currently being treated in hospital in the region, including eight in intensive care. No new deaths were reported.

More than a million kronor donated to Swedish Afghanistan charity

The Swedish Committee for Afghanistan (SCA) says it has received more than a million kronor in donations and new memberships in the past three days alone, by people who want to support the organisation following the Taliban takeover of Afghanistan.

The news comes after Sweden announced it would reconsider how best to deploy foreign aid to the country, with Prime Minister Stefan Löfven stressing it would “in no way give any aid to the Taliban”. Sweden also provides aid to SCA which does not go through the regime.