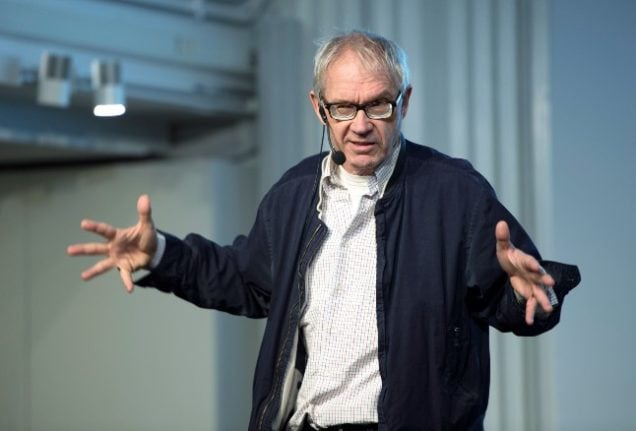 Who was Lars Vilks?

Lars Vilks, who was 75 at the time of his death, was a Swedish conceptual artist who made his name in 1980 with Nimis, a series of wooden structures illegally erected in the Kullaberg nature reserve on the coast of northwest Skåne.

According to Vilks, the long legal processes set in motion by the illegal structures was a part of the artwork.

Much of the artwork was burned to the ground in 2016, and Vilks drew daily fines when he reconstructed it over the following years.

Vilks had been under police protection since 2010, when a sketch he made of the prophet Mohammed with a dog’s body in the centre of a roundabout generated outrage among some Muslims, who consider any depiction of their prophet as deeply offensive or blasphemous.  Al-Qaeda offered a $100,000 reward for Vilks’ murder.

In 2015, Vilks survived a gun attack at a free-speech conference in Copenhagen that left a Danish film director dead.

He was in 2010 headbutted by an audience member at a lecture he gave in Uppsala, and in 2011 he was the intended victim of an attempted terror attack at the Gothenburg Book Fair.

What was his Muhammad art about?

Vilks was a conceptual artist rather than a cartoonist and his sketch of Muhammad was a reference to the rondellhundar, or “roundabout dogs”, a street art trend that arose in 2006 and saw anonymous people place home-made sculptures of dogs in the centres of roundabouts across Sweden.

So Vilks’ point seemed to be that the original “roundabout dogs” were illegal in a similar way to which Nimis was illegal (albeit not in a nature reservation), and that this did not impose such a serious limit on art as that imposed by Islam, which exposed anyone who depicted Muhammad in an unflattering way to a real risk of death.

What happened on Sunday afternoon?

At 3.30pm on Sunday afternoon, the armoured police vehicle in which Lars Vilks was travelling back from a lunch with his friend, the journalist Stina Lundberg Dabrowski, crossed over to the wrong side of the E4 motorway and collided with an oncoming truck, after which the car burst into flames.

Both Vilks and the two police officers travelling with him in the car were killed in the accident, while the driver of the truck was severely injured and is being treated in hospital.

A second police vehicle, which was following the bulletproof car, arrived at the accident moments afterwards, and its occupants have been able to provide a witness account of what they found.

What did the police say at the press conference on Monday morning?

Stefan Sintéus, who is responsible for the police’s investigations unit in southern Sweden, said on Monday that forensic investigators were looking at whether the bulletproof car had suffered a blowout on one of its tyres, pointing to rubber fragments found on parts of the road where the car had driven before the accident took place.

“If there was some kind of blowout, that something we need to look at and that’s what the forensic analysis should show,” he said.

He said it was not surprising that the car had smashed through the central reservation, which housed a wire fence.

“A bulletproof vehicle weighs about 4.5 tonnes and can build up a lot of momentum. That should be able to explain how it could drive through the wire railing,” he said.

The car was, however, equipped with puncture-proof tyres.

According to the Expressen newspaper, the car was travelling at “high speed”, but at the press conference, police would not confirm this.

How is the accident being investigated?

Police have launched an investigation into vållande till annans död, which according to Sweden’s legal trade newspaper Svensk Juristtidning translates into English as “causing another’s death”, in other words, negligent manslaughter.

Sinteus said that, although the accident was being investigated as a crime, no one is suspected of any wrongdoing.

“This is a formality that we go through with this type of investigation to be able to use everything in our toolboxes,” he said.

The driver of the truck has already been interviewed in hospital, but is not suspected of negligent behaviour.

He said that at present, police did not believe that the car had been sabotaged, or that the car was somehow pushed off the road.

“When you look at an investigation like this, you want a broad remit,” he said. “We absolutely want to rule out that there has been any external influence on the bulletproof car carrying Lars Vilks, but we want to be able to close that door completely.”

He said that as of yet, the investigation had not determined whether the car had been driving significantly above the speed limit at the time of the accident.

What memorials have been held after the attack?

Police in Helsingborg, Lund and Malmö came out onto central squares in their cities to hold a minute’s silence for their two dead colleagues.

“This is a difficult time. Unfortunately, this is a part of everyday life that you can experience as a police officer,” said Petra Stenkula, Malmö’s police chief, who said that she had known the two officers who died well.

“The Swedish police are in great mourning,” said Sweden’s interior minister Mikael Damberg, adding that it was “incredibly sad” that, after 10 years living under police protection, Vilks’ life had ended in this way.

He said it was important that the accident be properly investigated.

“This is about the safety of both the person under protection and the police officers who get up every morning and go to work. You should know that you’re going to come home again when you go out to work.”