Samira Manners, who has an English father and a Swedish mother, performing with her guitar. Photo: Annika Berglund/SVT

Twenty-one-year-old Samira Manners will perform her song, ‘I want to be loved’ in Melodifestivalen’s second heat.

That English accent is completely genuine. Samira grew up with a Swedish mother and English father, who comes from the coastal town of Portishead outside of Bristol.

Samira grew up in Sweden, though, in the small town of Svedala, a short hop from Malmö.

Samira started writing songs as she entered her teenage years and has continued into adulthood. Nowadays Samira calls Malmö her home, having moved to Sweden’s third city as she studies at Musikhögskolan. Unsurprisingly, she studies on their singer-songwriter program.

Growing up, it was her father who gave much of her musical inspiration.

“My dad loves music and I grew up a lot with him,” says Samira, who speaks English at home with her family. “He loves Kate Nash, Lily Allen and also reggae. In general, he loves genres that I never normally see or hear here in Sweden.”

While this will be Samira’s Melodifestivalen debut, she has had musical success prior to tonight. In 2020 she released the song ‘Do It All Again’ which currently has over two million streams on Spotify. ‘I want to be loved’ will be Samira’s fifth single and there are plans to release an album later this year.

Her Melodifestivalen entry was written on a warm summer day last year, when she penned personal lyrics about wanting to find a loving relationship.

The co-writer of the song, Fredrik Andersson, is somebody with a great reputation in Melodifestivalen folklore. He was the songwriter behind ‘If I Were Sorry’ for Frans, the breakthrough sensation who represented Sweden the last time the Eurovision Song Contest was held in Sweden in 2016.

After Samira’s song was written, Fredrik was the one who thought it may pass Melodifestivalen and sent the song to Sweden’s public broadcaster SVT, who chose the 28 songs that will compete this year.

Written for the contest, this song is not. For Samira there is a huge chasm between what it means to be taking part in Melodifestivalen here in Sweden, and the impression of her English family about this significance.

“When they called me to say I had got into Melodifestivalen, I told my grandparents”, Samira explains. “They were like, that’s nice, your cousin also plays the violin. I don’t think it’s as big there as it is here.”

Samira is right. The show taking place in the Avicii Arena this week will be watched by millions and will generate huge hits that will last until the summer if not beyond.

The huge event brings in big name acts and record labels in a way that it hasn’t been the case in the UK for this century, where the connotation that all things Eurovision is all things kitsch is still engrained to many in British culture.

“I think here [in Sweden] it is generally so much more competitive,” adds Samira. “You always have the best stuff on show and they make such a big deal about it. It is so sad as I think the UK has such a great music industry.”

Samira is one of the seven acts competing in Melodifestivalen’s second heat, and is not the only one with interest for British readers.

The hard rock group, Browsing Collection, are fronted by lead singer Mimi Brander, who has developed an uncanny Scottish accent thanks to her sister, who is married to a Scotsman. Also taking part this Saturday is John Lundvik, the winner of Melodifestivalen’s 2019 edition, who lived in London until he was six years old.

They will all be hoping to place better than half English/Swedish singer Shirley Clamp, who finished sixth of last week’s seven acts with the song ‘Let There Be Angels’.

Alongside the other names competing this week is former Idol winner Liamoo, with roots in Scandinavia and the Philippines, Alvaro Estrella, who’s parents come from Chile, and Tone Sekelius, making history as the first openly trans artist on the Melodifestivalen stage. In terms of a diverse mix of musical genres and artists this is a hugely varied Melodifestivalen heat.

One can watch Melodifestivalen on SVT Play globally or by tuning in to SVT 1 at 20:00. Viewers can vote in the show by ringing the number on screen or via downloading the free Melodifestivalen app. 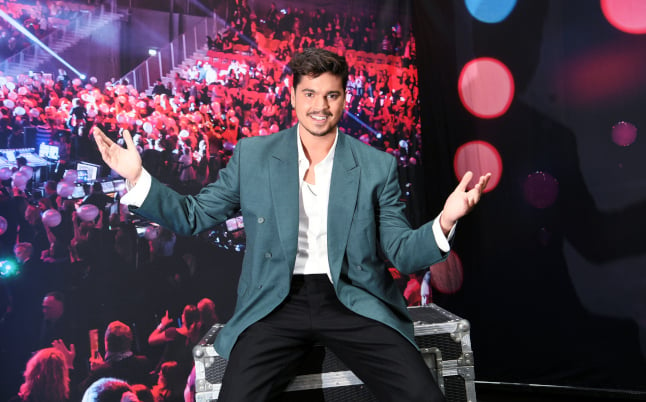 Melodifestivalen at its core is the Swedish show to select their entry for the Eurovision Song Contest, this year being held in Turin, Italy, after the explosive win from rock band Måneskin.

Yet the viewing figures for Melodifestivalen tower over all other major TV events in Sweden – 30 percent more people saw the final of Melodifestivalen compared to the country’s knockout game vs Ukraine in Euro 2020, and even the Eurovision Song Contest itself had just 83 percent of the Melodifestivalen audience. Only the Christmas tradition of watching those Donald Duck cartoons kept Melodifestivalen off the top spot on the TV ratings chart.

What is it that makes this unmissable television to so many? One argument could be that through the winter months there has been little else for family entertainment. However, that ignores the huge level of razzmatazz that Melodifestivalen constantly brings.

What fans have been guaranteed is some of the most beloved Swedish artists in the line-up, as 28 hopefuls have been reduced to 12 for the final.

There’s Robin Bengtsson, the artist who won in 2017 with an uncanny knack to allure and swoon the camera lens with his green eyes. However younger fans have been likely tuning in to see Theoz in action – the 16-year-old famous for his dance moves now commanding two million TikTok followers.

And while the artists are something for everyone, the music they bring also aims to appeal to all – and no, we don’t just mean cookie-cutter chart hits (although oh boy do they exist). The selection process for the 28 competing songs, half by a selection jury and half by Sweden’s public television broadcaster SVT, succeeds year after year in finding hits that dominate the radio through the spring.

While there are no strict quotas on the types of songs, an effort is made to ensure there is diversity in styles throughout and hits in both Swedish and English languages. This year’s line-up has included ballads, rap, rock and popera as well as the genres that are irreplaceable in Melodifestivalen folklore – the traditional dansband and schlager.

The aim is that there is something for everyone to love. Of course, that might mean there is plenty you might not in the process of whittling down 28 songs to one.

READ MORE: Which of these twelve contenders will Sweden choose to be its Eurovision entry?

There is also the scale of the TV spectacular that adds to the appeal, with bombastic performances promised each season. Melodifestivalen has produced such a legacy of top quality live TV entertainment that many of their former staff are now tasked with setting up the inaugural American Song Contest in March.

This year’s show has taken place in Globen, now named the Avicii Arena, the world’s largest hemispherical building that is one of the most famous landmarks on the Stockholm skyline.

We journalists can write about the symbolism of a return to the Avicii Arena. After all, it was ten years ago that Melodifestivalen was last held there, when Loreen was victorious with Euphoria, a song that won the 2012 Eurovision Song Contest in a landslide, resulting in Malmö hosting in 2013. Euphoria is still today the quintessential Eurovision hit now as it was then, and has topped the annual vote on ESC Radio each year this decade.

However the move to the Avicii Arena, was sadly Plan B in these ever changing times. With the infection rates of Covid-19 in Sweden, the team at Sweden’s public broadcaster SVT decided to scrap the planned tour across the country, saying it would be “indefensible” to travel from city to city in these current times.

Instead, three shows have been at the Avicii Arena before moving to Sweden’s national football stadium Friends Arena in Solna which has a capacity of 30,000.

The cities who have missed out this year, Gothenburg, Malmö, Linköping, Lidköping and Örnsköldsvik, have been promised to host the Melodifestivalen tour in 2023 instead.

A key focus from SVT this year is the community aspect of Melodifestivalen, so viewers don’t purely watch the show but interact with it in different ways. The Melodifestivalen App (available for Apple and Android) which allows viewers to vote completely free is so popular it is speculated that Melodifestivalen has the world record for highest second screen viewer engagement – with 1.2 million Swedes voting during last year’s final.

Furthermore there are increased efforts for dedicated English language coverage this year. Another app, the relaunched Mello United (available for tablets on Apple and Android) is designed for watching together with others.

And to think – all of this hysteria is ultimately for the simple purpose of selecting a three-minute to represent the nation. Yet in the list of cultural institutions that make Sweden Swedish, dancing round the Midsummer maypole, a smörgåsbord for Christmas dinner and huge bonfires on April 30th – watching Melodifestivalen with the family with crisps and lördagsgodis has become a quintessentially Swedish tradition.

To watch the grand final of Melodifestivalen tune in to SVT1 on Saturday 12 March at 8pm. The show is also available to listen on Sveriges Radio P4 and via SVT Play globally.

If you would rather not have to test your Swedish skills you can also tune into SVT Play where Bella Qvist and Olivia Le Poidevin, will be providing English commentary live.

To vote you have three options. The most popular method is to download the Melodifestivalen App, where you are able to cast up to five votes for free to each song. There are televoting options as well, one which costs 3.60 kronor and the other 9.90 kronor. The more expensive number donates all of that money to Radiohjälpen, which is donating all proceeds made from this week’s show to helping those in Ukraine. 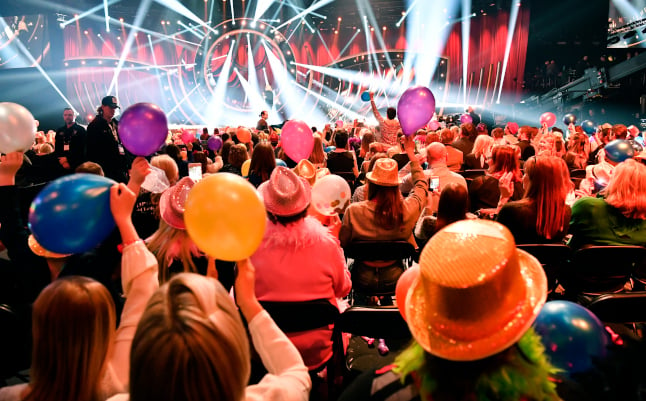