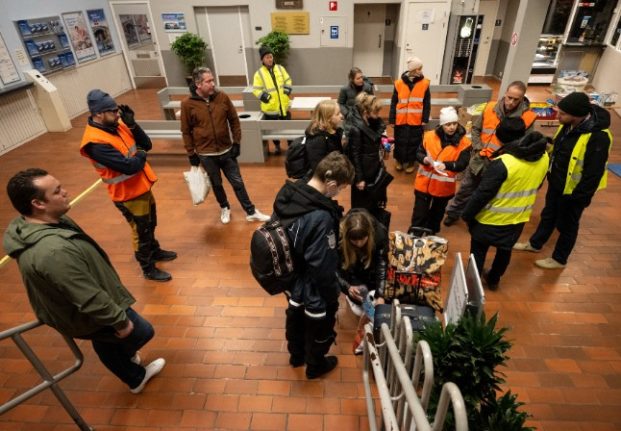 Ukrainian refugees arrive in the port of Ystad in southern Sweden on Saturday. Photo: Johan Nilsson/TT

Sweden’s foreign ministry on Sunday issued a warning against all journeys to Russia, pointing to the unpredictable security situation in the region. Airlines have already largely cancelled flights between Russia and Sweden, which might make it difficult to leave the country, it explained. At the same time, it may be difficult to access cash in the country, it said.

Stock up with enough to survive a week: Civil Contingencies Agency

Sweden’s Civil Contingencies Agency has advised citizens to stock up with enough goods to survive about a week, but warned them that if they start hoarding, supermarkets could start to run short.

Since the war in Ukraine broke out, Swedes have been rushing to buy up water containers, spirit stoves, and wind-up radios.

“There’s an enormous difference between prepping and hoarding,” Anna Wennerström, press spokesperson for the Civil Contingencies Agency told TT: “You have to prep with solidarity”.

She said that the agency recommended having a week of water, food and other essentials at home, as that was around the amount of time that it would take the authorities to recover from any crisis and begin to be able to provide essential services again.

Over 2,000 Ukrainians have sought asylum in Sweden

Over 2,000 Ukrainians have sought asylum in Sweden since Russia invaded Ukraine 11 days ago, the Swedish Migration Agency has reported, but almost half of those who have sought asylum had already been in the country at the time of the attack.

“Ukrainians can travel to Sweden without a visa, so that number says nothing about how many people have come here,” Magnus Önnestig, chief of the agency’s national operations division, told TT.

Ukrainians are allowed to be in Sweden for three months before they need to contact the agency, so it is difficult to know exactly how many have come to Sweden since the invasion, he explained.

He said that the agency had decided to increase the number of places in asylum centres from 1,500 to 15,000 in preparation of the arrival of more Ukrainian refugees.

Sweden’s Green and Liberal parties both still at risk of leaving parliament: poll

With only six months left until this year’s general election, the Green Party and Liberal Parties are both have less support from voters than the four percent threshold needed to enter parliament, according to a new poll of polls by Kantar Sifo for Swedish Radio.

The Left party remains unchanged at 9.7 percent, while the Christian Democrats have risen from 4.9 percent to 5.2 percent.

The island of Gotland is normally a place Swedes get away to in the warm summer months. But its location in the Baltic Sea near Kaliningrad also makes it a bellwether for Swedish fears of Russia.

“You never know”: like many other Swedes on the island of Gotland, Emelie Cedeskog has stocked up on canned foods and checked where the nearest air raid shelter is.

In a country long marked by a “fear of Russians”, many of the island’s 60,000 residents have had concerns reignited by tensions between the West and Moscow.

Sweden’s TT newswire has carried out a review of the stock portfolios of the 54 members of parliament who own more than 94,600 kronor in at least one listed company, finding several invested in sectors such as tobacco and gambling that are both ethically questionable and heavily exposed to regulation.

Mattias Bäckström Johansson, of the right-wing populist Sweden Democrats, is one of seven MPs with a large investment in Swedish Match, the snus tobacco company, and he is also among the three MPs to have investments in gambling companies.

“It can be problematic insofar as there may be conflicts of interest, therefore transparency is extremely important and this could be increased further,” Bäckström Johansson told the newswire. “On the other hand, I am a little surprised that so few members of parliament are shareholders.”