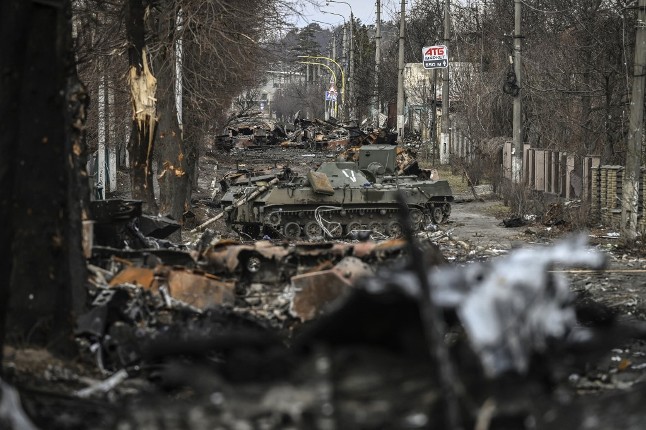 A column of destroyed Russian armoured vehicles sits abandoned in the city of Bucha, west of Kyiv. Photo: Aris Messinis/AFP

“The risk for us is relatively low at the moment,” Lieutenant Colonel Joakim Paasikivi, one of the Swedish Armed Forces’ top strategists, told the country’s TT newswire, as he sought to dampen fears that the conflict in Ukraine might spill over into Sweden.

“More than half” of Russia’s available military units are currently in Ukraine, he estimated, including a large number of the landing craft Russia would need to mount an attack on Sweden.

“Then you have to ask how it’s going [for Russia]. The answer is ‘not particularly well’. With the material losses which are also happening, it’s an incredibly big strain on Russia and Russia’s armed forces. I see it as unlikely that Russia would be able to do much more than possibly send reinforcements to Ukraine.”

After Russia’s invasion of Ukraine, Micael Bydén, Supreme Commander of the Swedish Armed Forces warned of an increased threat to Sweden and encouraged people living in Sweden to prepare themselves for the fact that the world has changed. Many Swedish residents have begun prepping and public interest in shelters has increased.

However, there is currently no imminent risk to Sweden. The government have not issued a state of heightened preparedness, which they would do if there was a danger of war breaking out.

“Large parts of the Russian army are focused on Ukraine now,” agreed Magnus Christiansson, a lecturer in military science at the Swedish Defence University.

He said that the 100 to 115 battalions are currently in Ukraine represented around 75 percent of the active serving Russian army.

While Russia’s air force has been playing a surprisingly small role in the invasion of Ukraine, Paasikivi said it was unlikely that Russia would use it to attack another country, without also committing forces on the ground.

He also said he did not see what Russia would have to gain from carrying out a nuclear strike.

The only real risk would come if Russia conscripted thousands of more men into its armed forces.

“Even though you might question the military value of such units, there is a risk in such a situation, which is why I believe that not only Sweden, but also the Baltic countries and Finland must take such a development seriously,” said Christiansson.
Paasikivi, however, said that the Baltic countries would probably be protected by their membership of Nato.

“Sweden and Finland are the weak cards in the region, but with the balance of forces as it is, I find it hard to believe there is a pending risk of war,” he said.

In addition, conscription would deal such a blow to Russia’s economy that President Vladimir Putin might struggle to maintain the support of the population, the two experts said, with Christiansson pointing out that the collapsing economy was already “threatening to destabilise the Russian state”.

“If you consider [what might happen if] a large part of the working population was conscripted, the economy would take a massive blow, and all the Russian mums wouldn’t think that was good,” agreed Paasikivi. “It would also be extremely difficult to justify on the grounds of the “limited special military operation”, which is neither a war not an invasion, in Ukraine.”