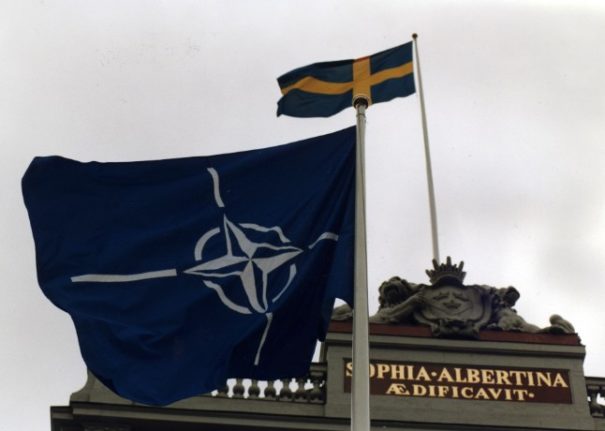 A Nato flag flies side by side next to a Swedish flag outside Sweden's foreign ministry in 1996. Photo: Hans Dahlskog/TT

Nato is a military and political alliance of 30 member states: the US and Canada in North America, 27 countries in Europe, and one, Turkey, which spans Europe and Asia.

Between its founding with twelve members in 1949 and the dissolution of the Soviet Union in 1991, it grew relatively slowly, with Greece and Turkey joining in 1952, West Germany in 1956, and Spain in 1982.

Its growth sped up following the dissolution of the Soviet Union. Poland, Hungary and the Czech Republic were the first former Soviet satellite states to join, in 1999. Bulgaria, Estonia, Latvia, Lithuania, Romania, Slovakia, and Slovenia followed in 2004.  Albania and Croatia joined in 2009, Montenegro in 2017, and North Macedonia in 2020.

How does Nato work?

The key article in the Nato Charter is the mutual defence clause, Article 5, which states that if a Nato member is the victim of an armed attack, each and every other member of the alliance will consider this an act of war.

Article 3, which states that member nations must invest in their own defence is also important, with Nato defence ministers agreeing in 2006 to invest a minimum of two percent of their GDP on defence.

Nato doesn’t have its own armed forces, but it has a military command structure staffed by soldiers and civilians from all member states. The organisation’s European command centre, the Supreme Headquarters Allied Powers Europe (SHAPE), is based in the Belgian city of Mons.

After the end of the Second World War, Sweden at first attempted to bolster its security in the face of the Soviet Union by creating a Nordic Defence Union with Denmark and Norway, with intense negotiations taking place throughout 1948.

After this attempt failed in 1949, Denmark and Norway became two of the twelve founder members of Nato, while Sweden and its eastern neighbour Finland opted to stay outside the new security alliance.

Instead, Sweden declared a security policy aiming for “non-alignment in peace with the goal of neutrality in war”.

According to Mikael Holmström, author of The Hidden Alliance – Sweden’s secret ties to Nato, Östen Undén, Sweden’s left-wing foreign minister at the time, did not want to be beholden to the US.

“He was sceptical of America and the American capitalistic system, and had a more friendly attitude, or at least a less sceptical one, towards the Soviet Union,” he told The Local.

During the 40 years of unbroken Social Democrat rule in Sweden which ended in 1976, neutrality became part of a broader vision of Sweden taking the “middle way” between the rival systems of the US and the Soviet Union.

“We had this blandekonomi [mixed economy] which was neither capitalist nor communist. We had this fantastic mixture in Sweden. It was the Swedish image — economically, politically and militarily — something Sweden projected abroad. And it was also a moral thing, that Sweden in a way was superior to both the East bloc and the West bloc.”

How far back does Sweden’s neutral stance go?

Sweden has maintained a neutral stance since 1814, when its troops invaded Denmark and then forced it to hand over its territories in Norway in the Treaty of Kiel. It stuck to its neutral stance through both the First World War and the Second World War, and was rewarded with rapid industrial development as it supplied the warring powers.

“You have to remember that the policy of neutrality had been successful,” Holmström says of the situation in 1949. “All Sweden’s neighbours had been drawn into the war, so they [the Social Democrats] didn’t want to change the policy.”

Until 1814, Sweden had frequently been an aggressive military force in Europe. Under Gustav II Adolf, the country rose to become one of Europe’s greatest powers. At the peak of Sweden’s powers in 1658, it controlled the Baltic states, Finland, much of Norway, and a strip of northern Germany.

The shift to neutrality came as a reaction to the high cost of the Russo-Swedish War (1788 to 1790), and of the Finnish War of (1808 to 1809). These ended disastrously with the loss of Finland to Russia, and put such a strain on Sweden’s finances that Gustav IV Adolf was deposed in a coup d’état.

How non-aligned was Sweden during the Cold War?

Sweden invested heavily in defence during the Cold War, something its leaders argued was essential if its policy of non-alliance was to be credible. At some points in the 1950s, Sweden had the world’s fourth-biggest airforce.

According to Mikael Holmström, though, it also maintained continuous hidden contacts with the Nato countries, with the two sides preparing secret plans to cooperate in the event of a war with the Soviet Union.

“The western countries had demobilised their forces, more or less, while at the same time, the Russians had more than three million men in Europe,” he says of the immediate aftermath of the Second World War. “There was a real fear of Russia, that the communists would destabilise Western Europe.”

The common Scandinavian defence plans had initially been developed during the 1948-1949 negotiations with Denmark and Norway, when four principles were established: that Scandinavia was a strategic unit; that the only threat came from the Soviet Union; that a certain degree of defence cooperation was necessary; and that the strategy during a war should be to hold out until the US and UK came to help.

Once Denmark and Norway joined Nato, the strategy remained in place, with Sweden’s two Nordic neighbours acting as a conduit between Sweden and Nato.

According to Holmström, while Sweden’s neutrality was totally accepted in Sweden’s domestic debate, Norway, Denmark and the US did not expect the country to remain neutral should war break out with the Soviet Union, and the Soviet Union itself believed Sweden played a double game.

In addition, Sweden’s defence strategy was always entirely based on warding off an attack from the Soviet Union, with no corresponding plans drawn up to defend against an attack from Western countries.

What has happened since the Cold War?

Sweden’s neutrality continued after the fall of the Soviet Union, but as the country wound down its own defence forces, it deepened its links with Nato countries.

In 1994, it joined the Nato Partnership for Peace programme, through which Nato cooperates with friendly countries which are not members of the alliance.

By 2007, a US diplomatic cable made public by WikiLeaks said that Sweden’s active participation in this programme and its role in the European Union’s 1,500-strong Nordic Battle Group gave “the lie to the official policy” of non-participation in military alliances and neutrality.

In 2009, Sweden entered into mutual self-defence treaties with the EU and other Nordic countries, ending nearly 200 years of official neutrality.

Following Russia’s annexation of Crimea in 2014, Sweden tightened its cooperation with Nato further, signing a Memorandum of Understanding on Host Nation Support, which sets out how it can host Nato troops on its territory for exercises and operations.

Peter Hultqvist, who became defence minister in October 2014, a month after the MoU was signed, has tightened cooperation with Nato still further, developing the so-called ‘Hultqvist Doctrine’, which combines boosting defence spending, tightening defence coordination with Nato, the US and Finland, while holding back from joining the security alliance.

How has public opinion changed?

Between the annexation of Crimea and February 2022, the share of Swedes in favour of joining Nato increased from 28 percent to 41 percent, according to the polling companies Ipsos and Nova. 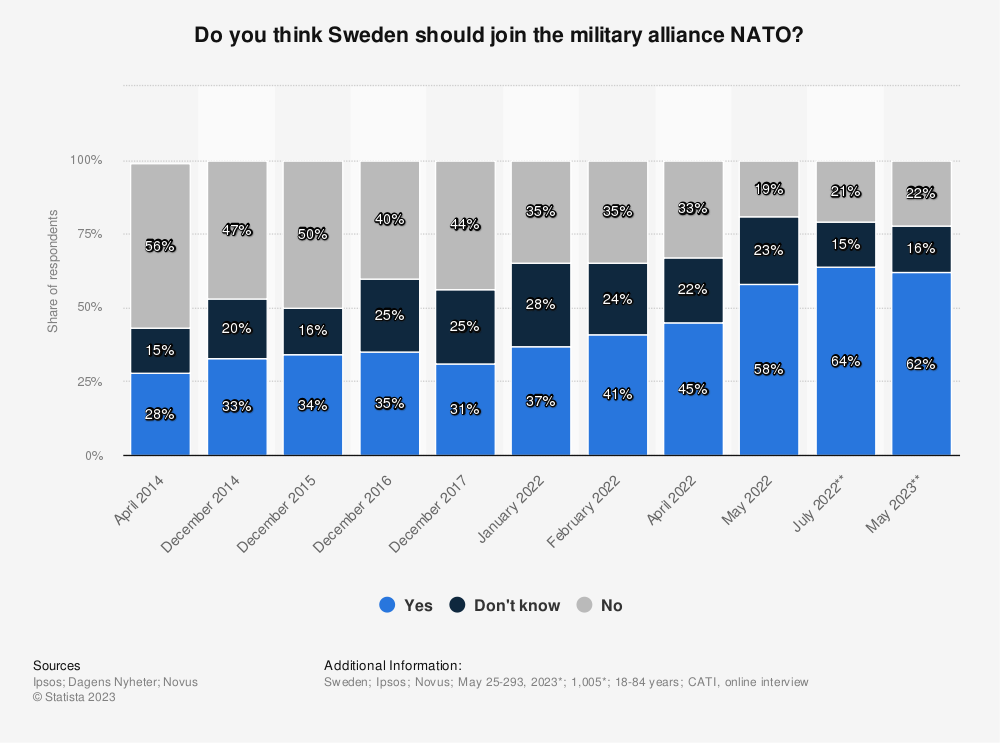 How has the Swedish state, parliament, and government, reacted to the changed security situation?

After the annexation of Crimea, Sweden’s government agreed, as part of a five-party defence agreement across the political divide, to appoint the Swedish diplomat Krister Bringéus to investigate Sweden’s security options given the changed situation.

In his conclusions, Säkerhet i en ny tid or Security in New Times, Bringéus argued that joining Nato would bring significant advantages.

“The uncertainty that prevails today about how coordination in a Baltic Sea crisis would take shape is eliminated and the West’s collective conflict-holding capacity would thereby probably increase,” he wrote.

In the parliament, the biggest shift has arguably been within the populist Sweden Democrats party, which has historically been opposed to Nato membership, and is now increasingly shifting in favour.

“If Finland suddenly decides to go further in its process, then we need to keep the door open, otherwise Sweden risks ending up in an extremely dangerous situation,” the party’s leader Jimmie Åkesson said in a speech at its party congress on Sunday. “And I want to be very clear about one thing: a rapid decision where the Sweden Democrats back Nato membership cannot be ruled out.”

Ahead of a meeting with Andersson at the start of this month, the opposition Moderate and Liberal parties made a joint call for the government to begin inter-party discussions over applying to join the alliance.

Andersson then said that a Swedish Nato application in the current security situation would only serve to further destabilise the region, although she has since qualified this statement, stressing in an interview that she was not closing the door to Nato membership.