Magdalena Andersson called it a “historic day for the Swedish people”, stating however that it could take up to a year before Sweden become members of the alliance.

July: As per Nato’s procedure for accepting new members, Nato experts will hold in-depth discussions with Sweden (and Finland) over how the country’s defence forces can contribute to Nato, any special requests from Sweden (such as a ban on nuclear weapons on Swedish soil), and how much Sweden will contribute to Nato’s common budget.

On June 28th, Ann Linde said that this stage of talks would begin in Brussels “next week”.

July: Sweden submit letter of intent to Nato, along with timetables for completion of reforms. The letter will be signed by Swedens’ foreign minister Ann Linde, and addressed to Nato’s Secretary-General.

July 2022-July 2023: Nato members ratify the Accession Protocols. The length of this stage is the most unpredictable, with different countries having different processes. According to TT newswire, this stage could take anywhere from a few months up to a year.

The US requires a two-thirds majority of the Senate to ratify a new member, while the UK requires no parliamentary vote at all. All 30 Nato members need to ratify Sweden’s Accession Protocols.

Sweden and Finland are, however, both uncontroversial applicants (unlike say, Ukraine or Georgia), so member states’ parliaments are likely to ultimately vote to let them join.

But it one or more of Nato’s member states throws up objections, as Turkey did previously (perhaps seeking concessions on other issues), the process could get bogged down again. 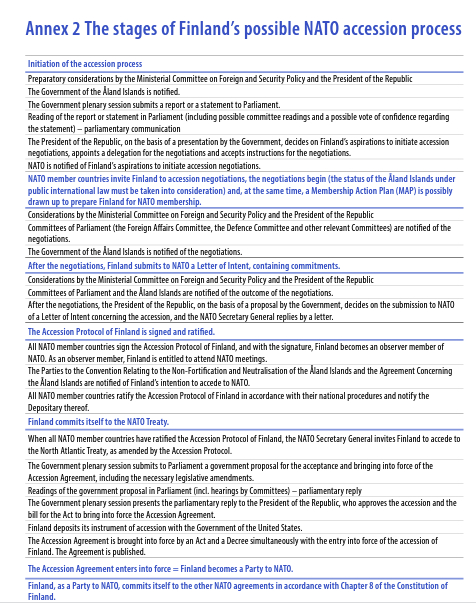 Here’s the list of stages needed for a Nato application, taken from the Finnish government’s new security analysis. Photo: Finnish Foreign Ministry
Below you can see what has already happened since Sweden and Finland began their processes in April.
Finland publishes Government report on changes to the security climate.

Finland’s parliament begins a plenary session to discuss the implications of the new security analysis.

Finland’s PM Sanna Marin said on April 13th that her country’s decision would take only “weeks”. The next stage for Finland will be a second government report, which takes into account the issues raised in the parliamentary debate. A special parliamentary monitoring group, which includes party leaders and chairs of the key committees will play a big role in communicating to government what the political consensus is.

: Sweden’s Social Democrats hold three digital members’ meetings on security policy. The party’s women’s organisation, Sveriges socialdemokratiska kvinnoförbund, has already voted to continue its opposition to membership. Other expected pockets of resistance are the Swedish Social Democratic Youth League, and Religious Social Democrats of Sweden, Socialdemokrater för tro och solidaritet, all of which have traditionally been among the most pacifistic arms of the party. Only 5,000 of the party’s 75,000 members have applied to take part, according to DN.

Finnish President Sauli Niinistö and Prime Minister Sanna Marin declared in a joint press release that Finland should apply to join Nato as soon as possible.

The Swedish government’s ‘security policy analysis group’ submitted its own reassessment of Sweden’s security situation, which said that Nato membership would increase Sweden’s security and decrease the risk of conflict within Europe. The Left and Green parties did not accept conclusions of the report.

Finland’s Social Democrats held a meeting of their party committee, which made a formal party decision to join Nato.

Social Democrats brought forward an extra meeting of the ruling party committee from May 24th to May 15th. The party decided at this meeting to back a Swedish Nato application, meaning that all the parties in the Swedish parliament apart from the Left Party and the Green Party back Nato membership.

Finland’s President Sauli Niinistö and the Finnish government’s Ministerial Committee on Foreign and Security Policy confirmed that Finland will apply for Nato membership.

: Sweden announced its decision to join Nato and sent in an application along with Finland.

From here, Sweden and Finland’s applications were expected to be accepted swiftly, with the two countries being formally invited to join the alliance shortly after.

However, Turkey raised objections to Sweden and Finland joining the alliance, threatening to veto their applications unless a string of demands were met, including the extradition of what it claims are Kurdish terrorists living in Sweden, and a relaxation of Sweden’s ban on selling arms to Turkey.

Turkish news outlets have reported that a delegation from Sweden’s Ministry of Justice will be in Turkey October 5th-6th, and that the scheduled talks will deal with “the extradition of criminal terrorists” from Sweden to Turkey. The Ministry of Justice confirmed to TT that this meeting would take place, and that it would involve senior officials rather than ministers.

While non-Swedish citizens can be extradited, this can only happen when the extradition is in line with Swedish law and the European Convention on Extradition.

Sweden’s outgoing foreign minister Ann Linde said on Tuesday that the Nato talks with Turkey were “moving along nicely”.

“My judgement is that Turkey will say ‘yes’ to Swedish Nato membership, however, I do not know when that will be,” she said.

An agreement was signed in Madrid this June by Turkey, Sweden, and Finland, which has also submitted an application for Nato membership. Under that agreement, Turkey lifted its objections to the two countries’ Nato applications. Among the topics covered in that agreement were terrorism, arms exports, and extraditions.

Moderate Party leader Ulf Kristersson has said he will keep Oscar Stenström, the diplomat appointed by the Social Democrats to lead Sweden’s Nato process, in place when he takes over as Sweden’s new Prime Minister later this month.

Only two of Nato’s 30 members have still to ratify Sweden and Finland’s accession: Turkey and Hungary.