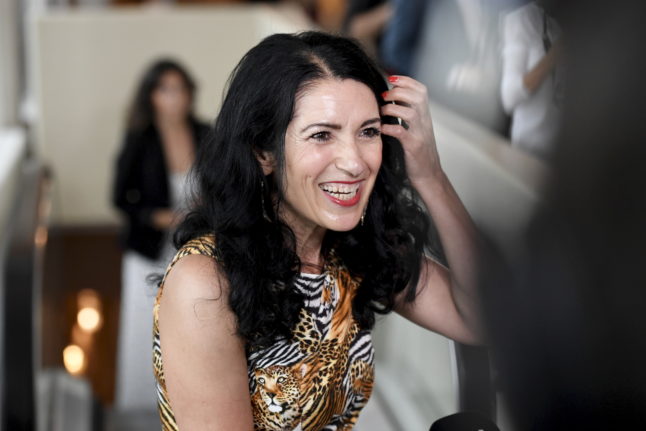 The Social Democrats may have to give further assurances to the pro-Kurdish MP Amineh Kakabaveh in order to overcome the no-confidence motion. Photo: Stina Stjernkvist / TT

The Sweden Democrats party on Thursday afternoon called a no-confidence motion, or misstroendeförklaring, against Sweden’s justice minister, Morgan Johansson. The motion, which was signed by 47 of the party’s 61 MPs, will be voted on by Sweden’s parliament on Tuesday June 7th.

After the Moderate, Christian Democrat, and Liberal Parties said they would back the motion, Sweden’s Prime Minister Magdalena Andersson then called a press conference on Thursday evening in which she angrily accused the opposition parties of playing irresponsible political games, and said that if Johansson is unseated by parliament, she would herself have to resign, along with her government.

How does a no-confidence motion work?

For a no-confidence motion against a minister to pass in parliament, 175 MPs need to vote in favour of it. If the motion passes the Speaker of the Parliament – currently the Moderate MP Andreas Norlén – then dismisses the minister from his post.

What’s the ostensible reason for the no-confidence motion?

It’s not too clear.

The Committee on the Constitution on Thursday published its annual scrutiny report into the government’s handling of a range of issues, which included criticism of the way Morgan Johansson had expressed himself over how many Afghan translators and other local staff Sweden could bring back from Afghanistan after the Taliban took over Kabul.

Morgansson had said, among other things, that 10,000 Afghans would need to be given residency permits and brought to Sweden, which the committee agreed was not true.

But when announcing the no-confidence motion, the Sweden Democrats focused more on Johansson’s alleged failure to take enough action over Sweden’s problems with shootings and gang crime.

“We have come to the point where the single most important measure we can take on law and order policy is to send Morgan Johansson off into early retirement,” the party’s group leader, Henrik Vinge, said.

How many MPs currently back the no-confidence motion?

When the Sweden Democrats filed the motion, there was everything to play for. If the party had managed to convince the Centre Party to vote in favour, then Johansson would have had to resign, as there would have been 204 MPs backing the motion.

But the Centre Party’s leader Annie Lööf on Friday morning confirmed in an Instagram post that her party would not back the motion, even though it supported the criticism made of him by the parliament’s Committee on the Constitution.

“You don’t crack social problems with political games,” she wrote. “Politics is a serious business and is about taking responsibility for the social problems which exist and having the energy to deal with them by staying put at the negotiating table to get hold of the tools needed to increase security.”

This leaves the opposition with the votes of just 174 MPs, one short of what they need to depose Johansson.

So what does this all have to do with Nato?

Annie Lööf’s backing does not mean the risk has gone completely. If Amineh Kakabaveh, the independent MP, backs the no-confidence motion, Johansson could still go.

To stop her voting against Magdalena Andersson candidacy as PM last November, the Social Democrats agreed a range of measures to support the Kurdish government in northern Syria, which angered Turkey.

Kakabaveh on Friday told Swedish state broadcaster SR that she was in touch with the Social Democrats to understand whether the deal she struck in November is threatened by negotiations with Turkey.

“I have said that I want clear information about what will happen with the agreement and the discussion we had seven months ago,” she said. “I understand that it is not a very appropriate time for another government crisis.”

This somewhat conciliatory tone indicates that Kakabaveh is perhaps not intending to exploit the situation to the full, but if she were to put her foot down and insist on stronger assurances to prevent Turkey succeeding in reducing Swedish support for the Kurdish government, that could make it more difficult for Sweden to reach a deal over Nato membership.

What’s the political purpose of the no-confidence motion?

For Sweden’s opposition, it makes sense to trigger a government crisis to inject some more energy into the election campaign, which has so far been largely drowned out by the drama over Sweden’s decision to join Nato.

It also helps to remind voters of how unstable the current Social Democrat government is, with Magdalena Andersson ruling with a majority of just one vote, the parties backing her deeply opposed on many issues, and the only thing uniting the coalition behind her being a determination to deny real political power to the Sweden Democrats.

What are the risks for the opposition?

The risk for the Moderate Party is that by backing the fifth no-confidence motion called by the Sweden Democrats in just eight years, at a time when there is a war in Ukraine and Sweden is deep in negotiations over Nato membership, they look irresponsible.