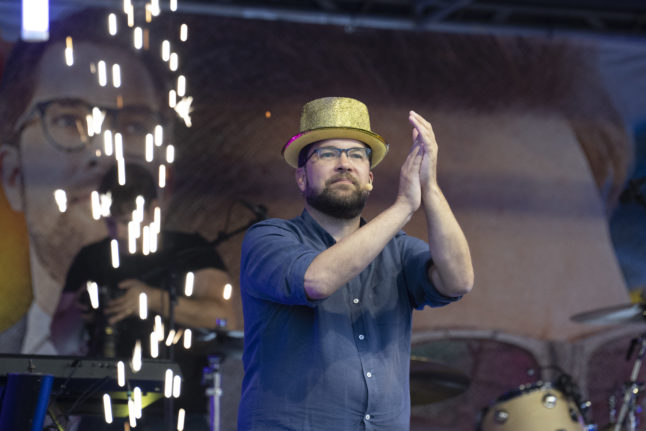 Will the Sweden Democrats join the governing coalition?

The party’s leader Jimmie Åkesson was absolutely clear in his speech just after midnight that that is his first choice.

This would mean following the strategy of their Norwegian equivalent, the Progress Party, which joined a coalition with Norway’s Conservative Party, rather than that of their Danish counterpart, the Danish People’s Party, which chose to wield power from the outside.

Moderate leader Ulf Kristersson reiterated in a TV4 debate before the election, however, that he was planning for the latter. “It will be a börgerlig [centre-right] government, with börgerlig parties,” he said

In our guide to bloc politics, Nicholas Aylott, assistant professor at Södertörn University, however ranks both options as “possible”.

Particularly if the Sweden Democrats win significantly more votes than the Moderate Party, it might be hard for the party’s leader Jimmie Åkesson to explain a decision not to demand ministerial posts, and also hard for Kristersson to deny them.

Either way, the party has said it will insist on the other parties signing a common policy document, setting out the priorities for the government, similar to the January Agreement under which the Centre and Liberal parties backed the Social Democrats at the start of 2019.

This makes it certain that Sweden Democrat policies will form a significant part of a right-wing government’s programme.

How could a right-wing government change the debate climate in Sweden?

In Denmark, the years in which the Danish People’s Party had a kingmaker role in parliament saw a dramatic change in the terms of public debate, with increasingly hostile rhetoric around Muslims and Islam. Islamophobia and anti-immigrant sentiment, meanwhile, became more prevalent among the general population.

Sweden is a consensus culture, and a right-wing government could slowly shift the åsiktskorridor, or opinion corridor, pushing the process which has seen parties on both sides in this election employ tougher language around crime and immigration to greater extremes.

It is possible that this change in the debate climate will be more muted than was the case in Denmark, as Swedish culture tends to be more moderate.

How could a Sweden Democrat-backed government change life for people who want to come to Sweden?

The party, in its proposal for “Sweden’s future migration policy”, is calling for Sweden to have “the lowest immigration in Europe”. This is taken directly from the Danish People’s Party, which after it won influence in 2001 drove through a new immigration policy in Denmark that it quite rightly boasted was “Europe’s strictest”.

In the immigration policy document, the party lists 30 ways it believes Sweden could tighten its asylum legislation while still meeting the minimum EU requirements.

When it comes to labour migrants, the party wants to:

This is similar to what the Social Democrats are proposing, although the party’s leader Jimmie Åkesson told The Local in an interview that his party did not want unions to have a say.

How could a Sweden Democrat-backed government change life for foreigners already in Sweden?

When it comes to asylum seekers and refugees already in Sweden, the party also plans to make life harder.

When it comes to criminal justice, the party has proposals for a range of new laws that single out foreigners, including:

How likely is it that these changes to immigration law will be brought in under a Moderate-led government?

In the Moderates’ manifesto, they also say they want to tighten Swedish asylum law to the most restrictive level allowed under EU law, and say they aim to reduce asylum in Sweden to “Danish or Norwegian levels”.

After the Sweden Democrats announced their immigration proposals, the Liberal Party said it disagreed with several proposed changes, particularly the one on “the asylum seeker creating the reason for asylum after leaving their home country”, as this would make it very difficult for LGBT asylum seekers.

There would be a fight, but many, or indeed most, of the Sweden Democrats’ proposals would probably become Swedish law.

To what extent could the Sweden Democrats undermine democracy and the rule of law?

Sweden’s former prime minister Stefan Löfven argued that the party was a threat to democracy in a recent opinion piece in Dagens Nyheter.

He pointed to the party’s calls for a reduction in Sweden’s national subsidies to newspapers and other media, their attacks on journalists, their calls for cuts to spending on culture, their calls to remove books in foreign languages from libraries, and discrimination against non-Swedish citizens.

The Sweden Democrats are in favour of cuts to the public service broadcasters SVT and SR, limiting them to a tighter public information role, and perhaps also combining SVT, SR, and educational broadcaster UR into a single organisation.

Several senior party figures have also raised the possibility of election irregularities on Sunday, which some on the left have warned is an early sign that they might question the result, as President Donald Trump did in the US after losing the 2020 election.

Judging by what has happened in Denmark and Norway when far-right parties gain political power, however, Sweden’s democracy should not be threatened.

Could the Sweden Democrats act as a brake on the Moderates’ economic and welfare policies?

The Sweden Democrats’ leader Jimmie Åkesson describes his party as economically on the left, and has threatened that if the Moderates seek to make cuts or otherwise limit Sweden’s A-Kassa system of social insurance, he will withdraw his party’s support and go into opposition.

The party has also called for dental care to be subsidised to the same extent as other medical treatments, a policy shared with the Left Party.

If they can get their immigration policies through, the Sweden Democrats are likely to offer the Moderates concessions over tax cuts and welfare spending.

But they will require at least some symbolic victories in the economic sphere — perhaps on A-kassa — so that it can prevent the Social Democrats from winning back working-class voters by accusing it of selling out voters’ welfare to the economic right.