Sweden is a tough country for freelancing. But many foreigners end up doing it anyway. The Local spoke to six of them about how they make it work.

You don't have to talk to too many freelancers in Sweden to find someone frustrated.
“I think the socialist Swede sees freelancers as micro-corporations that both take advantage and are taken advantage of,” argues Anna, a freelancer who relocated from the UK a few years back and who struggles with the tax and administrative burden.
“The unions have worked to lay a foundation to secure contracts for people, which is of the 9-5 type. And freelance work is unregulated and volatile, which is not popular in the eyes of Swedes.”
It's certainly true that Sweden remains at core a job-for-life, industrial economy. Life is smoother and easier if you're in a permanent job, with pensions, taxes and the rest all sorted.
But whether it's because they're in a creative field, because they find it hard to get a permanent job, or simply because it suits them, foreigners in Sweden often end up freelancing. 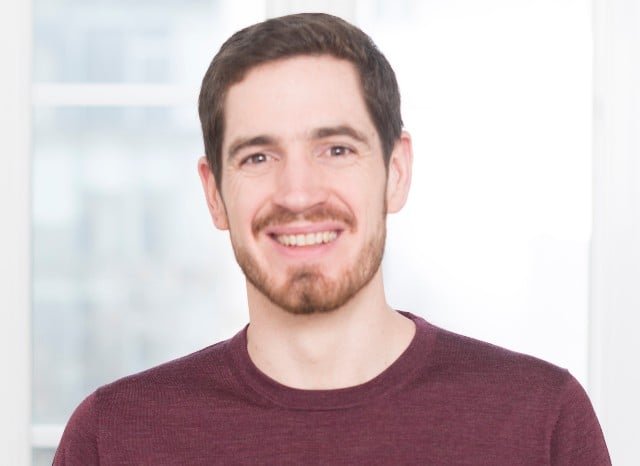 Pierre Killy works in Sweden as an engineering manager. Photo: Private
Pierre Killy, a software engineering manager, says that freelancing works well for tech workers, with a lot of agencies set up to arrange jobs, and a shortage of skilled programmers ensuring decent salaries.
“I would absolutely recommend freelancing in Sweden. The freelance broker market is mature, there is a lack of senior professionals, and the rates are good,” he says.
Jane Ruffino, who runs the UX content consultancy Character, has been freelancing for 20 years, first in Ireland and now in Sweden.
“One of the advantages of being a freelancer, I find, is being someone who can position yourself in an inside-outside way,” she says.
“It can mirror the way that it feels to live in Sweden as a foreigner – you might be aware of things and you're really knowledgeable, but you're a little bit outside. I think there's a real advantage to being kind of an outsider to the company.”
Companies which might be too conservative to hire a foreigner, particularly one who has worked in as many varied roles as she has, seem more tolerant when it comes to project work, she believes.
But Ruffino and Killy both work in tech, which anyway tends to be more open to international expertise. In other fields, freelancing can be a struggle for foreigners. 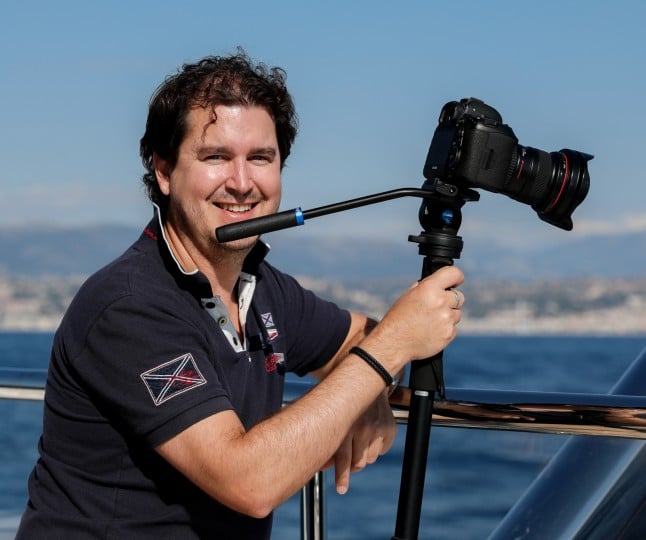 Andrew Clelland makes a living photographing yachts and vehicles. Photo: Yvan Grubski
Why it's important to network
Andrew Clelland, a corporate photographer based in Svedala outside Malmö, says he has only managed to build up a client base in Sweden by networking with non-Swedes employed at Swedish companies.
“It's not easy for foreigners, and especially a non-native Swedish speaker, to get a leg into the market,” he says.
After he set up his photography business in 2011, he started networking through the expatriate group InterNations.
“It came down to befriending people. I tried to attend business networking events, and I tried to attend social events, and in the end I got most of my work word-of-mouth,” he says.
“Up until today I still have got very few Swedish clients from meeting a Swede directly or liaising with a Swede directly. The Swedish are quite closed in the way they do business with other Scandinavians.”
Gabriel, a yoga teacher and web designer from the Philippines, who when interviewed has recently quit his day job after years of freelancing on the side, says he has had no problems finding clients.
“I have no formula, people just know about me and ask for help. I'm at the point that I have just too many clients. There are just too many people asking me,” he says.
Should I work in a shared office?
“Freelancing is LONELY. I miss office mates!” complains Amy Robinson, an Australian who moved to Stockholm with her English boyfriend for his job 13 months ago.
In Stockholm, Gothenburg and Malmö it is easy to find shared office space, either through freelance collectives, or through more corporate providers. This can be a good option if you prefer to work around others, and costs between 1,500 and 4,000 kronor ($157-420) a month.
Here's The Local's list of co-working spaces in Stockholm. 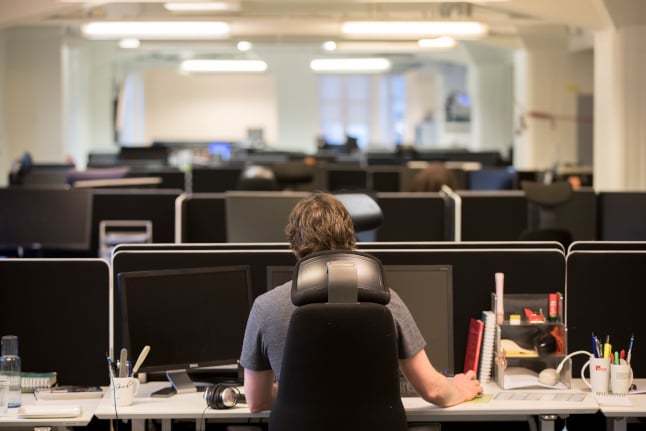 Photo: Vidar Ruud/NTB scanpix/TT
The Swedish Tax Agency is your friend
Unlike Anna, Clelland doesn't find the administration too difficult.
He has always run his business as a so-called enskild firma. (You can find out how to set up this way in The Local's previous guide on How to Register as a Freelancer.)
Freelancers in Sweden should keep in mind that once making good profit, they will be paying approximately 47 percent in total taxes to operate their business, but Clelland does not view the Swedish Tax Agency with resentment.
“Considering I didn't speak Swedish and I was starting out, I found the Swedish Tax Agency (Skatteverket) extremely helpful on all occasions,” he says. “When I missed a quarterly EU VAT return because I didn't understand the system, they waived the fine. They are quite encouraging, and want new businesses, especially for foreigners, to succeed and not to feel punished.”
In many countries, dealing with the tax authorities can take hours waiting in phone queues. More often than not, you find the person you end up talking to understands the system little better than you do.
But in Sweden, the agency's phone lines are well-staffed with people who are knowledgeable and helpful. Clelland ended up visiting the agency's offices in Malmö and receiving one-on-one help.
Gabriel also recommends getting in touch with the Swedish Tax Agency with any queries.
“The tax authority just functions here, and in the Philippines it doesn't,” he says. “You're always kept guessing on how much you'll have to pay in the Philippines.”
Should you get an accountant?
Clelland believes finding a good accountant is crucial. “One of the best investments you can make as a small business owner is get an accountant who knows what they're talking about,” he says.
His accountant taught him how to make the most of the Swedish system of 'preliminary tax', when the agency estimates your company's expected annual profit, and taxes you monthly so you avoid being bankrupted by a gigantic bill at the end of the year.
For example, you can put your income down as zero, and then you don't have to pay preliminary tax until you make a profit. You do then risk having a big bill at the end of the year though.
Having a good accountant when you start out also allows you to register equipment you buy as a debt which you can then spread out over the first few years of operation.
“It's quite nice in the beginning if you're not in the black,” he says. “If you are in the red, those losses go forward into the next year, so you're not paying any tax until all that negative income is balanced out.”
His accountant has more than paid for himself by uncovering a long list of expenses that can be claimed back.
“He's found things I can claim for I never would have found. For example, how to calculate the cost of my car properly for business use, which is a bit of a minefield.”
GET YOUR MONEY BACK: Don't miss out on these Swedish tax deductions
Gabriel finds it easier and cheaper to do his own accounting. Administration is anyway, he says, his “strongest suit”. He uses the Swedish accounting program Bokio to do his accounts, and has so far only had to use the free option.
“It helps very much. It just gives me the reminders of what to do, and when to submit stuff and so far I haven't had any problems or made mistakes with running the business, so I would highly recommend it.”
Like Clelland, he underlines the importance of keeping and filing all receipts obsessively.
Is it worth using an umbrella company?
For those whose freelance work is just a sideline, or who are incapable or unwilling to do administration, it can make sense to invoice clients through umbrella companies such as Cool Company and Frilans Finans, which put you in the position of an employee.
“It's a really nice middle ground, which means you don't have to deal with all of your taxes or set up with Skatteverket,” says Ruffino, who uses Frilans Finans.
“They're a really good way to manage your income in a country that has a complex landscape: when I told freelancers in other countries that we have it, they say, 'oh, I wish we had that'.”
But both charge about six percent of every invoice as their fee, which, depending on how much you invoice, can add up to quite a significant amount.
“They do take a chunk, but for me it's worth it, because I can just invoice and they even follow up if the client is late to pay,” Ruffino says.
It's also more difficult to write off expenses when you use these services.
“I probably am losing out, but I want to focus my energy on billable time or on what I'm doing to build up my client base,” Ruffino admits. “My tip would be to use the umbrella services until they don't serve you any more.”
Jumana Khoja, who came to Sweden as a refugee from Syria four years ago, uses Cool Company to bill for her business Facebook marketing for a private clinic. The freelance job is a sideline to the Masters in Media and Communication she is doing at Lund University, so she feels it is not worth her time to set up her own firm.
“I compared how much I would get if I was paid 6,000 kronor, and I found Cool Company had the same kind of accounting as the others and I think Cool Company is the most popular, so then I started using it.” 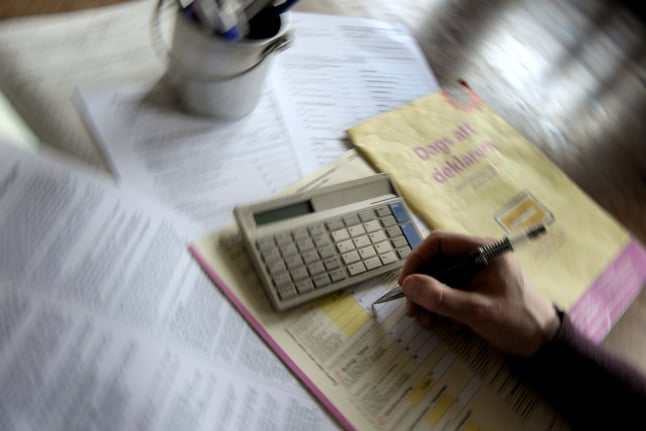 Photo: Anders Wiklund/TT
What about setting up as a registered AB?
Anna complains of the “crazy amount of administration” involved in starting up a registered company in Sweden, known as an aktiebolag or AB for short. But Killy, who started off with an enskild firma, worked out that in the long run staying as that meant paying significantly more tax.
“It's 100,000 times easier than in France!!” he says of the process. “You open a specific account in a bank, then you fill in the online form, you wait a few days and 'bam', you have a company!”
“With an enskild firma I was paying around 65 percent tax. I now have an AB and I pay around 45-50 percent.”
He estimates that he still gets about 10-20 percent less in his pocket than he did back in France, but says the Swedish state makes up for this in what it gives back.
“Things work here: administration, transport, schools, et cetera. That makes a big difference. It's very important to see that the tax you pay comes back to you somehow.”