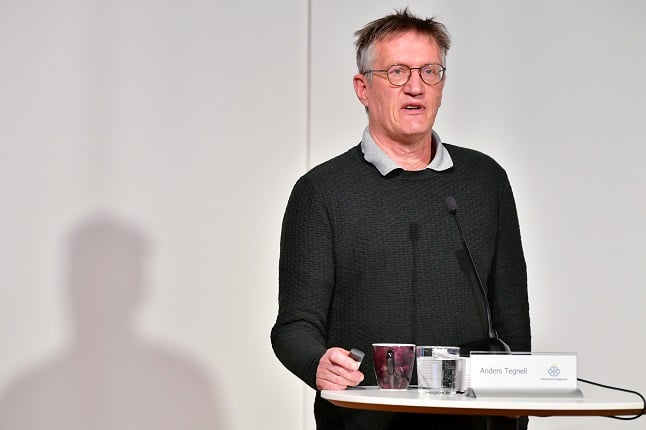 The main news from Tuesday’s coronavirus press conference was the Public Health Agency’s decision to restart vaccinations using the AstraZeneca vaccine, initially only for over-65s, which The Local has written about here.

The 14-day incidence rate rose again, to 644 cases per 100,000 residents, which means that across Sweden, more than one person in every 200 received a positive Covid-19 test result in the last 14 days.

“We are definitely on the way to a further increase [in cases and the spread of the virus] this week,” said state epidemiologist Anders Tegnell. “Exactly how big an increase, we don’t know yet, but it is clearly an increase.”

He reiterated that the agency’s assessment is that the reason for the increasing spread of the virus is declining compliance with existing recommendations and restrictions.

Another 16 deaths have been recorded, bringing Sweden’s coronavirus death toll to 13,373. A total of 773,690 cases have been confirmed so far and 5,795 people have received intensive care treatment since the start of the outbreak, the Public Health Agency reported.

In Sweden’s hospitals, the number of people receiving care for Covid-19 has risen to over 1,700, with 294 people being treated for the virus in intensive care wards. The latter figure has not been so high since January 22nd.

“What we are worried about is that there may be a further worsening of the situation before it gets better again,” said the National Board of Health and Welfare’s Iréne Nilsson Carlsson.

At a national level, the country has fallen below its target of having 20 percent available ICU capacity, with just 18 percent spare capacity.

The regions with the largest number of Covid-19 patients in intensive care in relation to the local population are Uppsala, Dalarna, Gävleborg and Östergötland.

Nilsson Carlsson reported a rise week-on-week in infection rates among elderly people receiving at-home care, and said this highlighted the need to continue focusing on vaccinating the most vulnerable people in society.

As of Tuesday, Sweden had given the first dose of Covid-19 vaccines to just over 12 percent of the population, including most residents of care homes for the elderly.