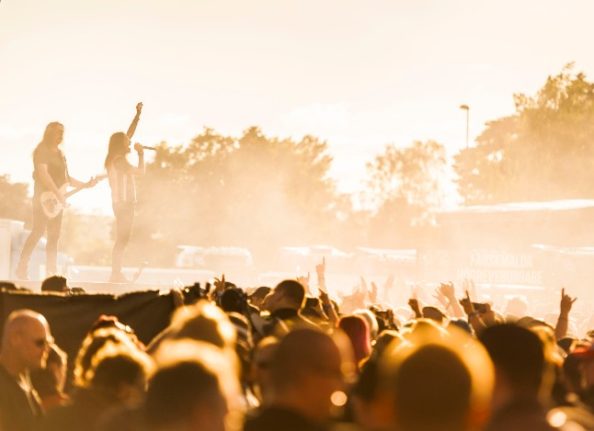 It's not at all certain that big rock festivals like Sweden Rock will happen even at Level 1. Photo: Hanna Franzén/TT

What restrictions are currently in place?

Currently, under the Pandemic Law and Public Order Act, public gatherings are limited to just 8 people, as are private gatherings held in places which can be hired out, including the party rooms in apartment buildings. The Pandemic Law also sets limits on the number of visitors to shops, gyms, swimming pools and sports facilities, and a separate law regulates restaurants, cafes and bars.

As well as these laws, the Public Health Agency also issues far-reaching recommendations, gathered here, requesting that people should only “socialise with a small circle of people”, that they should work from home if possible, and wear face masks on public transport.

What’s the plan for easing restrictions?

The Public Health Agency set out the level of restrictions that it believes will need to be in place for each of three different levels of infection in a formal proposal to the government. Its proposal only covers legal restrictions and does not consider how the agency’s recommendations, on, for instance, face masks on public transport or home working, will be altered at each level.

According to Sara Byfors, a unit chief at the Public Health Agency, the vaccination programme will be the driving factor in moving between the levels, though she did not give a concrete timeline.

“The vaccinations are going to move us from level three to level one,” Byfors told Dagens Nyheter newspaper in an interview on how restrictions will slowly be lifted.

At all stages, there is also the possibility for stricter restrictions in specific regions based on the local spread of infection and impact on the healthcare sector.

Sweden is currently at Level 3, the most severe stage.

A Level 3 situation means the healthcare system is under severe pressure, with several regions declaring themselves to be in a catastrophic situation (katastrofläge), in need of reinforcements (förstärkningsläge), or a crisis situation (stabsläge). Non-urgent operations and other healthcare need to be put on hold to make way for Covid-19. At Level 3, a majority of regions have a high number of daily cases which is either on a plateau or rising.

The agency’s proposal does not provide any numbers that define what number of cases would count as “high”, or exactly how many regions would need to declare themselves under pressure.

At Level 3, the Public Health Agency recommends that:

Under the Public Health Agency proposals, Sweden would reach Level 2 when the healthcare systems of most regions have a good chance of caring both for the number of Covid-19 patients and of all others who require care. Infection rates would need to be either at a relatively low plateau or falling in most regions.

Again, the agency does not say exactly how this should be defined, but says it would be based on reports given from regions to the National Board of Health and Welfare.

At Level 2, the Public Health Agency recommends that:

For the Covid-19 situation to be classed as Level 1, the agency says there should be few patients in any region being treated for Covid-19, and the healthcare systems in all regions have no constraints on treating patients. At this stage, the infection rate of Covid-19 should be low and there are only small outbreaks.

When does the Public Health Agency believe that enough people will be vaccinated to lift restrictions?

Sweden’s vaccination coordinator Richard Bergström said on Monday that the goal of vaccinating all 8.2 million adults in the first six months of 2021 now looked impossible, predicting instead that about 5 million would probably be fully vaccinated, with all adults having received their first dose.

But her interview with DN, Byfors said that even if all adults were not vaccinated by midsummer, enough would be to allow restrictions to be lifted.

“We are fairly certain that we are going to reach a better situation in the coming six months with the vaccinations,” she said.

“There is still not full knowledge of how the vaccines protect against the spread of infection and nor do we know when different groups will be fully vaccinated.”

Even when the vaccinations have been completed, she added, that would not mean the end of Covid-19.

“We don’t believe that Covid-19 is a disease which we’re ever going to completely get rid of.”

How does this compare to other countries’ re-opening plans?

Most other countries in Europe have had stricter restrictions in place in Sweden, including specific limits of the number of people who may meet privately and closure of many non-essential businesses,

Denmark’s prime minister Mette Frederiksen said last Monday that almost every restriction in Denmark could be lifted as soon as everyone over the age of 50 has been vaccinated.

The UK has set out a timetable, with non-essential retail, zoos, and a swathe of other parts of society opening on April 12th, a further set of reopening before May 17th, and all legal limits on social contact removed by June 21st. But these dates will only be kept to if the vaccination programme has a positive effect in reducing deaths and hospitalisations, and if the risk assessment does not change.

Germany’s planned re-opening is tied mainly to the incidence rate (number of new cases reported per capita), with different restrictions relaxed the lower this number falls.

France’s government at the start of this month said it hoped to start lifting restrictions by mid-April, with the government hoping to use QR codes, a health pass and other technology to lift restrictions without an explosion in cases. But with the country currently facing a return to lockdown, that now looks highly unlikely.

The Local has contacted the government to find out how it intends to respond.