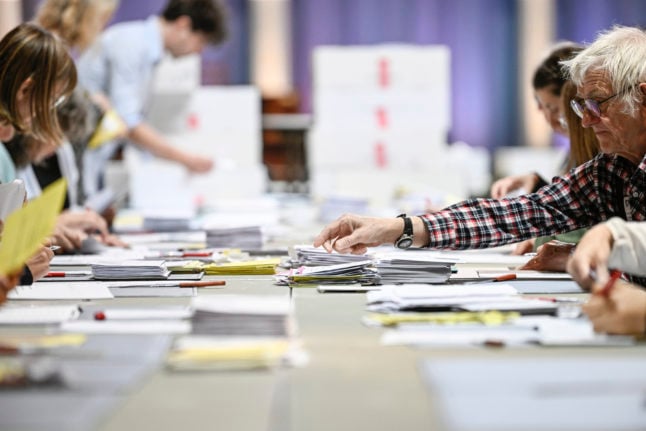 With 95 percent of votes counted on Monday, the right-wing led by conservative Moderates leader Ulf Kristersson was credited with an absolute majority of 175 of 349 seats in parliament, based on a 47,000 vote lead. Andersson’s left bloc trailed with 174 mandates.

READ ALSO: Why we might have to wait until Thursday for Sweden’s final election result

With the vote deemed too close to call, Sweden’s Election Authority said on Tuesday evening it expected a final result by the end of Wednesday, when the 200,000 to 250,000 last ballots from abroad and from advance voting have been counted.

By 3pm on Wednesday, the first 100 districts had been counted without any mandates shifting between Sweden’s eight parties.

Many experts in Sweden believe the Wednesday count is unlikely to change the result of the election, as happened in 1979, when overseas voters ousted Swedish Prime Minister Olof Palme. On Monday, Anders Lindberg, leader writer on the Aftonbladet said it appeared “impossible for the left to win because the votes from abroad are… usually in favour of the right”.

But Maria Solevid, who carried out a survey of Swedish overseas voters in 2014 which indicated that they skewed towards the Moderate Party and away from the Social Democrats, said the evidence from past elections did not point towards a right-wing shift.

“There is no systematic pattern that supports the idea that the votes that are added have a right-wing tendency,” she told The Local. “We cannot say whether there will be any shift, and we cannot predict how the shift would look like, or say that it will always be to the right.”

Prime Minister Andersson, 55, has refused to throw in the towel just yet.

“We’re not going to have a final result tonight”, she told supporters late Sunday as her party was seen posting a strong result of around 30 percent of votes.

She called on Swedes to “have patience” and “let democracy run its course”.

Kristersson, who vowed during the campaign to crack down on law and order amid soaring crime rates, said late Sunday he was “ready to build a new and strong government” if the results were confirmed.

The election’s big winner was the anti-immigration, nationalist Sweden Democrats party, which was credited on Sunday with 20.7 percent of votes, making it the biggest party on the right and the second biggest in the country behind the Social Democrats. This had dropped to 20.6 percent by 3pm on Wednesday.

The party’s success was the only reason why right bloc — made up of the Sweden Democrats, Moderates, Christian Democrats and Liberals — won a larger 49.8 percent of votes. By 3pm on Wednesday this had decreased very slightly to 49.7 percent.

The left, comprised of the Social Democrats, the Left, the Greens and the Centre parties, were meanwhile credited with 48.8 percent, trailing by around 47,000 votes out of 7.8 million eligible voters.

At 3pm on Wednesday, the left bloc had a tiny increase of 0.1 percent, putting it on 48.8 percent of the vote.

Jimmie Åkesson, the far-right party’s leader began early talks with Kristersson over lunch at the Moderate Party’s offices in Stockholm’s Gamla Stan earlier this week, but would not be drawn on what, if any, discussions were had.

“This is a discussion which is being carried out in an extremely constructive spirit, and also respecting the fact that we do not yet have an election result,” said Gunnar Strömmar, the Moderates’ General Secretary. “If it turns out that there’s a majority for a change in government, this is a process which must be allowed to take time.”

Tensions on the right

The right-wing bloc is rife with internal divisions, and Kristersson could struggle to form a stable coalition government.

The Liberals have opposed the idea of the Sweden Democrats being given ministerial posts, and would prefer for them to remain in the background providing informal support in parliament.

Åkesson has previously insisted his party sit in government, or else he will present a long list of costly demands in exchange for his support.

That could be too much for the Liberals to stomach.

“It would suffice for one of the Liberal party’s far-right-critical MPs to dissent for Ulf Kristersson’s government to find itself in serious trouble,” Dagens Nyheter wrote on Monday.

A Kristersson-led government “will have to deal with very strong internal tensions and some Liberals will demand that they start to cooperate with the Social Democrats instead”, he told AFP.

Analysts stressed Sweden was in need of political stability amid a busy schedule in the coming months.

The country faces a looming economic crisis, is in the midst of a historic and delicate Nato application process, and is due to take over the EU presidency in 2023. 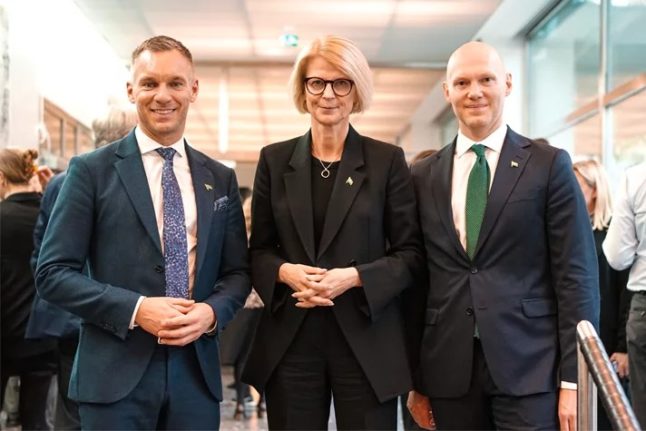 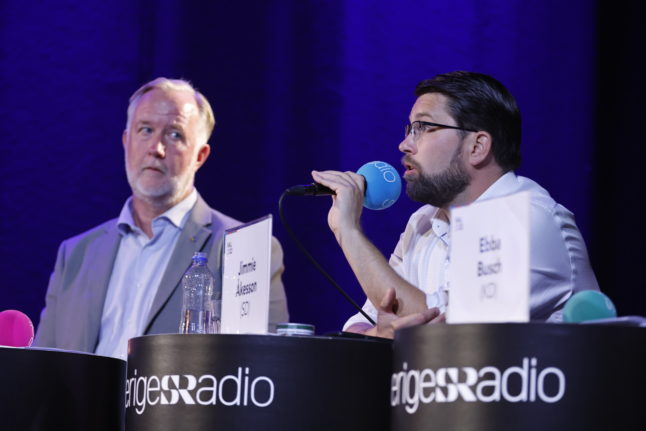